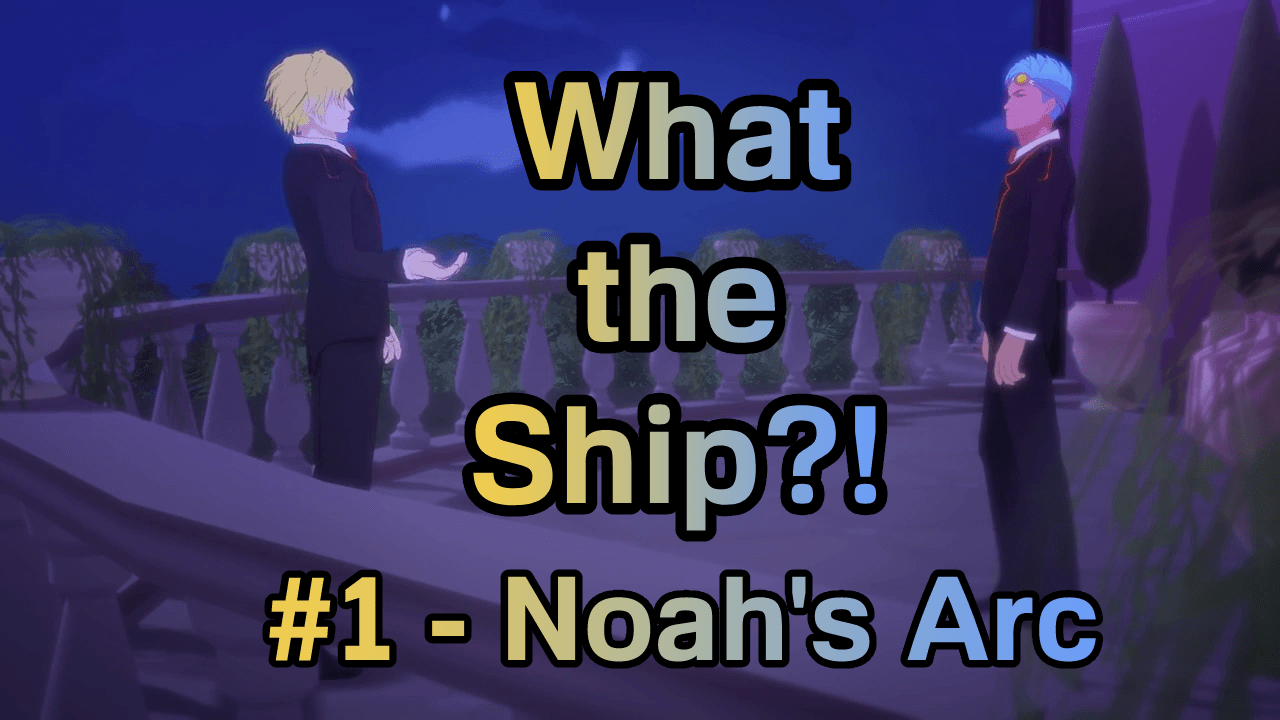 Welcome to What the Ship?! – the series that introduces, analyses and evaluates the pairings between RWBY characters, known as ships. And in our first issue we’re discussing a ship that recently got its engines kickstarted by one of the members of CRWBY – Noah’s Arc. Besides, it’s only fitting that a series about ships starts by covering one based on a large boat.

What is Noah’s Arc?

It’s the ship between Jaune Arc and Neptune Vasilias. The name comes from Jaune’s last name and the fact that Neptune (due to his name and his phobia) is often associated with water. A watery Arc conveys imagery of Noah’s Ark, so by simply changing the last letter we get the ship’s name – Noah’s Arc. Truthfully, the ship isn’t that widely known by this name, and is more commonly referred to as simply: Jaune x Neptune.

Jaune and Neptune meet for the first time in V2E6 “Burning the Candle.” Well, meet is a strong word – more appropriately Jaune notices Neptune for the first time, while Neptune is too busy considering Weiss’s proposal to go to the dance with her.

In V2E7 “Dance Dance Infiltration” Jaune and Neptune have a pivotal scene together, which actually leads to quite a lot of development and maturity between the both of them. Jaune realizes that he hurt Pyrrha the same way Neptune hurt Weiss, while Neptune opens up to Jaune and reveals that he’s not just a pretty face and a cool attitude, but that he’s trying really hard to maintain that appearance. Oh and they even fist bump each other.

In V2E9 “Search and Destroy” Neptune and Jaune also share a scene together, and if those two are the ship of your choice, those seven seconds are as important to you as Volumes 6 and 7 were for Bumbleby fans. Neptune claims he and Sun will work with a crimes specialist and even get junior detective badges, to which Jaune replies with a :O

Jaune’s exaggerated gasp with actual twinkly stars is almost certainly a childish reaction to the junior detective badges brag, which is supposed to reinforce the young-teenage-boy attitude of Jaune, but if you like stretches, you could say that Jaune is also impressed by Neptune and that this scene officially sets the sails for Noah’s Arc.

And… that’s it. Neptune and Jaune didn’t share a single scene in Volumes 3 and 6, and Neptune was absent in all others. Truthfully, there’s not a whole lot going on between them, but at least these two have met each other and even had some development together.

Number of lines spoken between Jaune and Neptune: 35 lines.

Number of “looks” given to one another: 1 look.

In short – not at all. It is by far one of the least popular ships in the show, and that is saying something. There’s two obvious problems. First, both Neptune and Jaune have explicitly expressed interest in the other gender and were never confirmed to be bi themselves. While that usually doesn’t stops ships from sailing, the second problem is that Noah’s Arc is vastly overshadowed by other, much more popular ships – Arkos in the case of Jaune and Sea Monkeys in the case of Neptune.

At the time of publishing, Noah’s Arc is in 34 stories on the website. To contrast, Arkos (Jaune and Pyrrha) appear in 1623 stories, while Sea Monkeys has 387. Although Noah’s Arc is popular enough to receive some fan art and attention, it is one of the more obscure vessels in the FNDM.

Up until just now they barely acknowledged it. The attention to this ship came from Miles Luna’s video from Cameo (a service with which celebrities can record personalized videos and clips for a fee), where he said that out of the male cast of RWBY, the person most likely to start a romance with Jaune would be Neptune. Although Miles is one of the lead creators of the show and the voice actor for Jaune, he was very likely just voicing his opinion, and the tone of the video is playful, rather than informative. With this and the source of the video in mind, it really should not be taken too seriously or as a sign that it will become confirmed in the show.

Jaune and Neptune had only a couple of minutes of screen time and have not shared a scene for longer than 6 years. Noah’s Arc is also not very popular within the fandom and the shows creators barely acknowledge the possibility. Given these circumstances, a decent buoyancy rating cannot be given.

Dilapidated? I’d say that the schematics for the boat were never finished 😀

I really hope that the FNDM sees that what Miles said was just for fun and isn’t meant to be taken seriously. I’m all for same sex couples in the show, just not for Jaune. I hope you guys do one on White Knight soon and be sure to include what happened in Volume 8 with Weiss looking at Jaune after he saved Penny and what happened in the finale. Also be sure to include how it’s gained more popularity and become more favored over time

Yes, Miles’s video was immediately taken out of context and as a serious confirmation to a lot of things. It’s best to treat it the same way as this article or any piece of fan content – just someone sharing their opinion and interest.
White Knight is a must-do ship for RWBY and there’s even some interesting things for the ship that aren’t too obvious.