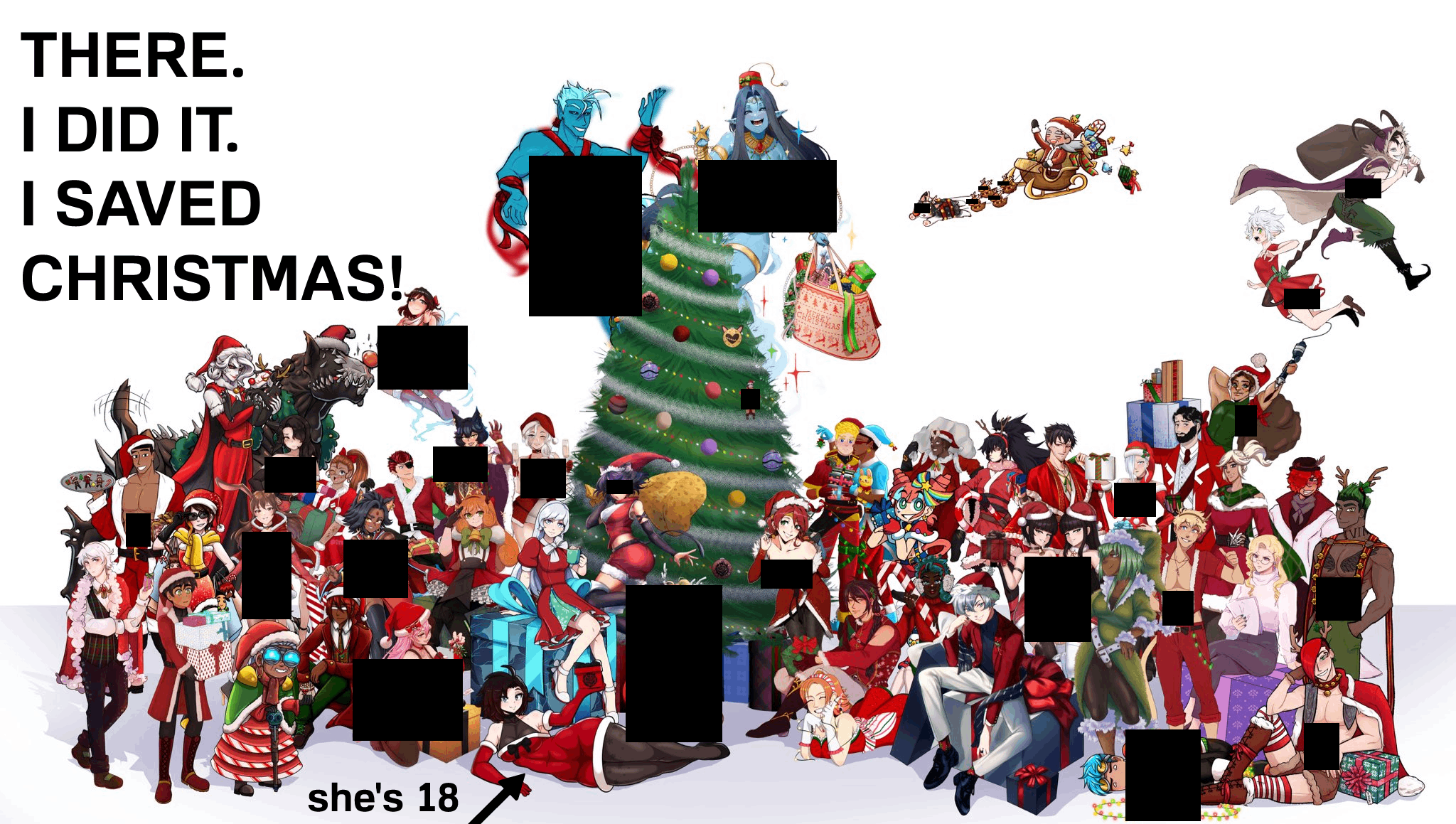 On Christmas day of 2022, a whole bunch of extremely talented artists collaborated together to celebrate RWBY, the FNDM and, of course, the third-sexiest winter holiday. By each drawing one (or more) RWBY characters in their own style, the artists created a gorgeous collage named #RWBYHolidayBash that could put all other fandoms to shame. By doing so they also completely divided the RWBY community and pissed off a bunch of people on the internet.

By all accounts, the majority loved the hundreds of cumulative hours that were put into this incredible collaboration piece, but then there were definitely quite a few disgruntled commenters, that hated the piece for various reasons. Practically all of them had to with how the characters were drawn. As in, they were showing too much skin, were posed in a way that was too suggestive or were drawn with exaggerated and oversexualized proportions. Other concerns about sexualization of fictional minors were raised, however, those only seem to apply to Ruby and even that is questionable (Rooster Teeth avoids giving any definitive answer on Ruby’s age, so ¯\_(ツ)_/¯ )

Anyone familiar with the RWBY art scene, could take a look at the long credits list, or at the visual artist guide and immediately notice that quite a few artists have drawn, or are known for drawing, not safe for work (NSFW) images. Their style, refined over the years to best suit their careers, is clearly visible here. And a collaboration of this scale naturally included some of the most well-known artists in the community, most of which are known for doing NSFW art. A quick check shows that out of 11 artists featured with at least 10,000 Twitter followers*, only 3 don’t do NSFW art. It’s quite clear that the RWBY fan-art community really enjoys their risqué drawings, but obviously it isn’t to everyone’s tastes.

While I won’t feature the backlash that the drawing received (you can see plenty of that in the quote-retweets yourself), the response to the backlash is worth mentioning. While some just straight up engaged in internet flame wars that’d be worthy of the console debates of the early 2010s, the artists met their critics with general bewilderment and amusement. The artist who drew Yang and Jinn in the colab, lulu_chan92, even posted a hilarious drawing mocking the absurdity of the entire situation. Later on, further accusations of villainy and evil-doing were thrown around, like lying to the other participating artists about not including NSFW creators – a rumor that was quickly disproven by one of the organizers, Keith.

After the article’s publishing even more allegations came out. This time Keith is accused of transphobia for not including the canonically trans May Marigold, even though the artists themselves chose the characters. The other massive accusation thrown towards Keith was… uh… him shipping/drawing Weiss with his OC? Since when is that a crime?! Hopefully these critics won’t find my AO3 account!

Right now, the RWBY community is more divided than ever – especially on the art front. This art controversy almost immediately follows another, which we poked fun of in our previous article. While the artists don’t seem too shaken by the reception, with Keith already planning and inviting artists for a new collaboration, the extensive hiatus has definitely put the FNDM in a much more aggressive mindset. I really can’t take any more heated discussions of Yang’s breast size relative to her breaking spine. I just need Volume 9 to come out and have people call each other names for liking or disliking that instead.

*I know Twitter followers aren’t a great way to measure popularity of content creators, and that I chose quite an arbitrary number, but it was an easy base-line to set.

We Need Your Opinions on RWBY’s Crunchyroll Deal!

Yeah, the balloon-animal proportions of yang etc totally disrespect the original character designs, why not give jaune a massive bulging crotch while you’re at it and maybe make Weiss stacked too? There is already a huge rwbynsfw community, which is definitely where this art belongs, it’s a totally rad piece for that community but of course people in the mainstream community are pissed about it. They are sick of people trying to justify why both communities should be safe harbour for nsfw stuff when you should be able to get away from it in the RWBY subreddit.

TheSinful
Reply to  get fucked

Yes, how dare characters (check notes) have abs and/or cleavage. The horror. This is hardcore pornography right here

PixelWisp
Reply to  get fucked

Congratulations to all of the artists who contributed to the RWBY Christmas collab art! It’s always exciting to see a group of talented individuals come together to create something special, and the RWBY fandom is one that is particularly close-knit and passionate.

I have to say, though, that I noticed a decline in the art quality of one of the participants, Luluchan92. It’s unfortunate to see this happen, as their work used to be some of my favorites in the group. I hope that they are able to get back on track and produce artwork that meets the high standards that they have set for themselves in the past.

In addition to the issue with Luluchan92’s art quality, I also noticed some unintentional “lewds” and bizarre anatomy in some of the pieces. While I understand that these things can happen in collaborative projects, it’s important for the participants to communicate and collaborate effectively to avoid these types of issues. It’s not just about producing great art individually, but also working together as a team to create something cohesive and polished.

Effective communication is key in any collaborative project, and it’s especially important in the world of art. Artists often have different styles and approaches, and it can be challenging to find a way to bring these together in a cohesive way. That’s why it’s so important for everyone to be open and honest with each other about their ideas and concerns, and to work together to find solutions that work for everyone.

There are a few different strategies that artists can use to facilitate effective communication and collaboration in group projects. One is to establish clear roles and responsibilities for each member of the team. This can help to ensure that everyone knows what is expected of them and can focus on their specific tasks without feeling overwhelmed or unsure of what to do.

Another strategy is to set up regular check-ins or meetings to discuss the progress of the project and address any issues or concerns that may have arisen. This can be especially important in the early stages of a project, when everyone is still getting to know each other and finding their footing.

Finally, it’s always a good idea to be open and willing to listen to feedback from others. Whether it’s feedback from team members, mentors, or even just casual observers, it’s important to consider all perspectives and use that information to make the project the best it can be.

In conclusion, I want to say once again how impressed I am by the RWBY Christmas collab art and the hard work that went into it. I hope that everyone continues to grow and improve as artists, both individually and as a group. Keep up the great work!

I know you probably meant the best for this comment, but I can’t help but feel like it was written by ChatGPT. Maybe I’m wrong, but something just feels a little formulaic in this paragraph structure.

BREAKING: Prudish artists of a series kept alive almost solely by its Rule34 community angry that community project had characters drawn in a risqué manner.

TheSinful
Reply to  Lol at prudes

Love how the article doesn’t once explain what RWBY or what FNDM stand for and instead just uses the acronyms freely without explanation. This makes the entire article unreadable.

If you’re not already within those circles, and lack the knowledge of what those both mean, the article, and the media it contains weren’t produced for you.

This isn’t a “gatekeeping” comment, because you’re free to be a part of the community, and you’d be gladly welcomed, but if you don’t know what those 2 things mean, then this probably wasn’t produced for you to understand.

RWBY isn’t an acronym (at least in this sense), rather, it’s an animated web series that this website and, by extent, this article revolve around. Considering the subject matter wouldn’t be too important for most people outside of RWBY community, I didn’t explain that RWBY stands for an animated internet show or what it’s all about.
As for the word FNDM, its meaning becomes clear at the first attempt to pronounce it – it’s just a goofy way the community refers to the RWBY fandom. Still, that one’s on me.
While I didn’t expect the article to reach people outside the RWBY community, (admittedly that’s pretty cool), I do apologize for not making the context clearer. Hopefully by this time you’ve already had a quick Google search and discovered the context on your own or surmised it from the article.
-Kate

Could someone explain to an RWBY fan what exactly is “NSFW” in that piece? I don’t see any nudity or sexual content at all. Sure, a lot of exaggerated features, but nothing exposed.

Mind you, I’m going by the posted picture in this article. If there was another panel that actually is NSFW, then I can potentially see the issue.

Based on what I see thought, all I can say is that some people just seem to be “looking” for a fight.

Super late reaction: I love how the extra censorship boxes make this collab seem muuuuch more ‘off’ than it actually was (nobody anywhere was actually exposing NSFW bits. Lots of abs & cleavage, and the blue spirit people have Barbie/Ken-doll anatomy. Ruby, Yang & Jinn’s proportions were rather janked for a ‘general audiences’ work, though). But holy *hell* is the ‘whip up puritans and counter-puritans for hypelulz’ rhetoric back on reddit, uh, way more concerning than any individual art piece.