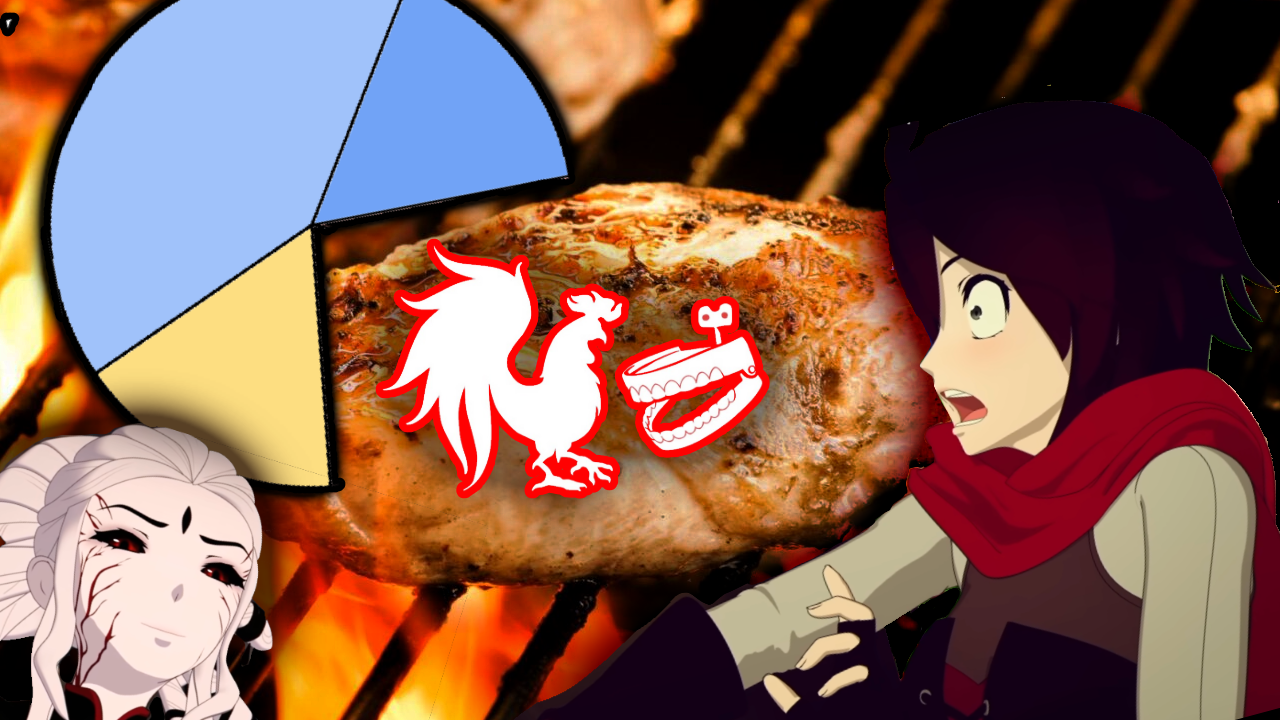 Is the fandom divided to Salem’s satisfaction? Is RWBY losing the magic with their viewers? Is Rooster Teeth getting deep fried?! We found out, as we asked over 170 people across various social media and communities for their thoughts on the current and future state of RWBY and Rooster Teeth.

The survey was published in our HIVE article, which it then shared around in relevant social media circles including Twitter, Tumblr, various subreddits and Discord servers. It featured 36 questions about RWBY and their communities and Rooster Teeth and included questions like ‘Do you still continue watching RWBY?’ and ‘How much do your friends and family know about RWBY?’. For the purpose of this article, however, we will focus primarily on the results relating to Rooster Teeth’s recent controversy, which happened on October 15th 2022.

Based on the average of the results of five different questions, we discover that approximately 64% of participants do not trust Rooster Teeth at the moment. Many of them were not only aware of the current controversy prior to starting this survey, but they have also heard of previous workplace issues at Rooster Teeth. The most recent controversy caused 19% of participants to lose faith in the delivery of RWBY as a main series entirely. Notably, this number includes those who not only disagree with the current direction of the show, but they also doubt whether Volume 9 will even arrive in 2023 and be of good quality.

“It definitely felt like a betrayal, in a way,”

“It’s quite disheartening seeing a company I used to enjoy turn into such a miserable, hopeless place to work,” one of the survey respondents said. “[As fans of RWBY], it’s embarrassing to see this company that produces something I enjoy find themselves in controversy after controversy with [some] change.”

The survey also reveals that 52% of participants are likely to trust CRWBY in developing RWBY as a show. When asked which part of the multiple allegations and raised issued affected them the most, 50% of respondents have felt that the reveal of Rooster Teeth’s working conditions and poor pay had the biggest impact. 15% chose Kdin’s recorded history of bigotry and hate speech, and 7% selected Arryn and Sam’s receipt of threats from Gray Haddock. Interestingly, roughly 39% of participants had their wellbeing impacted by the recent controversy.

“It definitely felt like a betrayal, in a way,” said Jessica. “Not because I thought I knew them personally or anything, but I (and many others obviously) had believed that they were better than this. For me personally it’s been emotionally exhausting, and I was extremely worried about RWBY. Once I could process a bit more, my concerns have evolved to include the employees who haven’t done anything wrong and are caught up in all of this.”

However, when we asked the participants on which of the common statements from viewers of the show they agree with the most, the results pointed in a good direction. 41% mostly agree that CRWBY deserves a better working environment, regardless of studio. 33% mostly believe that the main series of RWBY should reach to its conclusion. Kdin, who was the first to speak out against Rooster Teeth on October, still values CRWBY and hopes for the show to reach to its conclusion. It also shows that only 11.5% of participants mostly want the show to be given a reboot. The most positive responses to that question were popular with RWBY fans from the survey, while the most negative – being cancellations, closures and reboots – were most popular with those who don’t think of themselves as fans of the show.

Combined with the other data of participants, those who identify as male wish for the show to either reach its conclusion or be given to another studio or company, while female respondents mostly prefer to see the show be rebooted or see CRWBY be given a better working environment. Younger participants of the survey also would prefer CRWBY members in better environments or have the show rebooted, while older participants lean more towards RWBY being given to another company or studio.

“There are major issues behind the scenes, but I’ve loved the finished product up to this point so I hope to see it continue.”

When we shifted the results into categories of genders and age groups, it revealed that there was a lower ratio of Male participants who are fans of RWBY than those from other genders. Same applies to those who continues to watch RWBY, hopes for Volume 9 success and follows communities closely.

It’s worth mentioning that the show is most popular with under 24’s, suggesting it was currently more of a generational thing. Although, ’30-35′ was the age group that believed the most in Volume 9’s successful delivery in 2023.

“I think RWBY is just like any other show,” said Mic. “There are major issues behind the scenes, but I’ve loved the finished product up to this point so I hope to see it continue. I desperately hope that [Rooster Teeth] changes their business practices though.”

Even if 57% of participants continue to watch RWBY, it’s still good to see people hoping that RWBY continues to reach its conclusion, and that CRWBY receives a much better working environment. The recent controversy wasn’t that hard-hitting to the point of seeing the Roosters burn to the ground, but people still expect them to improve much more, if they were to redeem themselves after a decade of workplace abuse and hold on to RWBY as their ultimate jewel on their crown.

To conclude, we have asked people on which aspects of RWBY that they were most and least satsified with. Here are the results:

It revealed that the show’s animation and fight scenes are their best aspects, while the pacing and allegories are the worst parts of it. It seems that White Fang subplot really did not go to plan, huh? Interestingly, participants prefer the villains more than the heroes by a slight amount, while the scope of the show fared better than the show’s production and writing.

“I love the series, it’s a part of my life, but I dont like the pacing,” Dragon said. “They’re rushing things too fast, like the White Fang conclusion. Ironwood’s descent into madness should have had more time to make it more simple. I sometimes see RWBY as Megaman X6; it really has some good ideals, but [the show RWBY] rushed through things and they didn’t turn out so well, but I still love the series no matter what!”

Thank you to all survey respondents and readers of this article. If you’d like to learn more about the data we’ve gathered, then please feel free to leave a comment below.

NOTE: As the results are based on the data of 179 Participants, they may not be fully representative of the generalized viewpoint of the RWBY community

Will their be a link to a document with all the responses? I would like to see more of the written responses

Certainly, the report with all the data and comments will arrive soon!