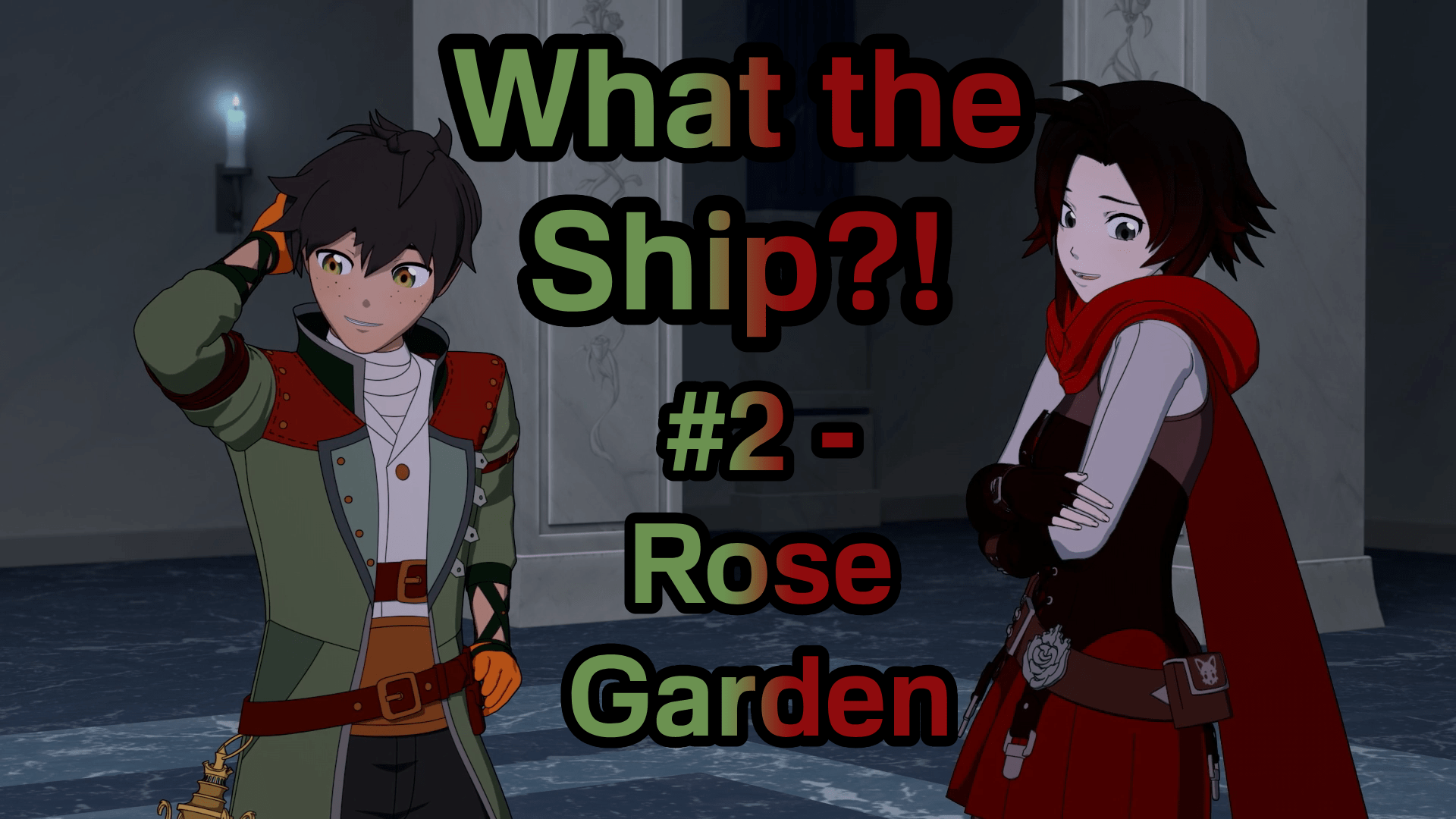 Welcome to What the Ship?! – the series that introduces, analyses and evaluates the pairings between RWBY characters, known as ships. In our second issue, we’re covering Rose Garden, one of the more popular “new” ships around – one between the two of the most important and youngest protagonists in the show.

What is Rose Garden?

It’s the ship between Ruby Rose and Oscar Pine. Although it varies depending on the source, the name is usually spelling in one word – Rosegarden. For the sake of visual clarity, we’ll be using Rose Garden, but feel free to call it however you want. The name comes from Ruby’s last name Rose and the fact that Oscar was a farmhand. Farmhands tend gardens as well, so the name evokes the perfect imagery for both Ruby and Oscar.

Although Oscar debuted in V4E4: “Family”, he only met Ruby in V5E1: “Welcome to Haven.” Ruby opened up with a classic line: “What is going on out there?! Can’t a girl read her comics in peace?!”, following up with a dispassionate: “Qrow, did you get drunk again?” Oscar’s first words to Ruby, however, were a bit different: “You… have silver eyes…” This line is also Ozpin’s first line said to Ruby in the very first episode of the show. It’s doubtful that Ozpin fed the line to Oscar, as the professor didn’t need to said it again, while Oscar himself seemed genuinely surprised by Ruby’s eyes. Most likely it was simply proof to the audience that Oscar and Ozpin truly are likeminded souls.

That line in particular perfectly portrays their relationship at the beginning of Volume 5 – while Oscar is bewildered by the experience of talking to a young huntress, Ruby is more interested about Ozpin (“We’ve never met a person with two souls!”). Ozpin’s… interference in the blossoming relationship of the two continues throughout Volume 5, such as when Oz interrupted their first one on one interaction in the sparring scene of V5E4 “Lighting the Fire”.

Thankfully, Ozpin did not appear until the end of their first heartwarming scene together in V5E5 “Necessary Sacrifice”. Oscar and Ruby shared a real heart-to-heart together, with the farmhand exposing his own fear and the huntress reassuring him, while remembering her fallen friends. Both even shed a tear. This scene is a great example of why Volume 5 is important to a lot of ships.

In Volume 6 their dynamic changes slightly – Ruby becomes the protector of Oscar in a way, reassuring him in V6E4 “So That’s How It Is” (“You’re your own person.”) and demanding Jaune to stop interrogating Oscar in V6E8 “Dead End.” In V6E9 “Lost” the two share a cute, but slightly awkward smile over Oscar’s new outfit, on which Ruby comments on. This awkwardness basically becomes a tradition with these two from now on. The rest of the Volume is pretty much Ruby performing more and more reckless acts of heroism and Oscar being worried sick over her. One thing to note is that when Ruby is remembering her positive experiences for her Silver Eyes in V6E13 “Our Way”, one of the flashbacks is her talking to Oscar in Volume 5.

In V7E1 “The Greatest Kingdom” Oscar shows off his combat capabilities against Grimm for the first time, taking down a Sabyr. Ruby saves him from another, shooting it and giving him a warm look – continuing to protect the younger hero. In V7E3 “Ace Operatives” Ruby and Oscar share a short scene discussing lying to Ironwood, but they keep up their awkward way of speaking to one another, obviously pointing to at least some level of attraction in the relationship. The shy-teenager-talking-to-crush reaches the peak in V7E9 “As Above, So Below”, where the two uncomfortably mumble about for 5 seconds before both declaring they should tell Ironwood the truth, after which they nervously giggle for a while. It continues for a bit and honestly it’s heartwarmingly sweet; it’s also the scene responsible for quite a few Rose Garden fans. Even though they both blundered through the conversation, it’s clear that Ruby trusts Oscar completely, while he himself has gotten more confident, willingly going to admit the truth to Ironwood.

Unfortunately, Volume 8 didn’t really feed the soil for our Rose Garden. In V8E1 “Divide” Ruby is the one from the team giving Oscar a lift from Mantle and as Ruby touches Oscar, he immediately blushes. For the vast majority of the volume, however, they spend separated. They reunite in V8E10 “The One Where the Bees Almost Kissed”, as Ruby almost hugs Oscar (she only hugs Yang, her sister, and does not hug Jaune or Ren). Unfortunately, she’s hugblocked by Emerald. And, barring four lines being exchanged in the next episode, that’s the last episode where they meaningfully interact for the rest of the Volume…

The dynamic between these two is an interesting one for a ship. Ruby, the youngest and most innocent of her own team, takes on a sort of inspirational role, guiding, mentoring and protecting the younger Oscar while he slowly becomes a more capable and confident member of the group. Depending on much you want to look into their one-to-one scenes, Rose Garden truly could be a steadfast and reliable boat.

Number of lines spoken between Ruby and Oscar : 92 lines.

Number of “looks” given to one another: 15 looks.

Unfortunately for Rose Garden, it’s a ship involving arguably the two most important characters in the story, at least for now. That means there’s very strong competition for this ship from both sides. On the port side, we have White Rose (Weiss and Ruby), which was basically Ruby’s thing for the entire of Volume 6. Then, in Volumes 7 and 8 we get the return of Nuts & Dolts (Penny and Ruby). If those two cruisers weren’t enough, on the starboard side there’s corvette-class ships The Emerald City (Emerald and Oscar) and Prince and the Pauper (Whitley and Oscar), which have been gaining speed since the last few episodes of Volume 8.

And then we come to the Ozma-shaped elephant in the room… Oscar isn’t alone, not ever. It’s heavily implied that Ozpin constantly watches over him and can even take control of the young boy, not to mention that they will eventually merge into a single consciousness. Having a millennia-year-old wizard living inside a 15-year-old’s head is weird enough, but if he’s there making or reciprocating the advances of a teenage girl…

Speaking of which, how old is Oscar? Do we count only his body’s age, in which case his ships with any adult aren’t right, or do we count his mental age (at least after the merge) which would make Ozma being in a relationship with a teenager a bit creepy. In Volumes 6 or 7 Rose Garden was just a ship between Oscar and Ruby, as Ozma wasn’t present in almost any scenes. Once Oz returned at the final episode of Volume 7, Rose Garden just stopped being seen so much, at least in the show.

And if we’re trying to address the Ozma issue, we’re not entirely sure Ozma is even capable of a deeper relationship. We see Bryan from Starbucks Ozma with a family, however it’s never explained whether he had children before or after Ozma’s reincarnation into that body. The children have Silver Eyes, while neither of the adults in the scene do, so they could be from a different parent entirely (although the similarities between the children and Bryan suggest some genetic relation). Speaking of Silver Eyes, there is a theory that the children in the scene are the progenitors of the Silver Eyed Warriors, perhaps even distant relatives of Ruby. Which would make Rose Garden the weirdest, wonkiest and non-straightforward incest ship around. Uh oh.

Still, this isn’t to say that the ship isn’t popular. In fact, it’s currently Oscar’s most popular ship by far, which means the Ozma situation isn’t that bad or at least does not bother many fans. It seems that the moments that Ruby and Oscar have had together truly resonated with quite a few people, Ozma be damned.

At the time of publishing, Rose Garden is in 274 stories on the website, which is seriously impressive, since Oscar himself is in 1638 stories. To contrast, White Rose appears in an astounding 3836 stories, Nuts & Dolts in 513 and Prince and the Pauper in a respectable 63 works. Shout out to the 44 stories with the “Oscar Pine & Everyone” tag, which basically means he has a non-romantic relationship with everyone involved. Poor farmboy just wants to be a friend to everyone, you know?

Overall, it’s easy to see that Rose Garden, while not an infallible destroyer class ship, is still really popular. It’s also one that consistently gets great new artwork and other creative works from fans.

Miles Luna, in a 2017 RTX London panel, alongside other prominent CRWBY members, publicly acknowledged Rose Garden and claimed that the 2 year age difference is not a problem for the ship whatsoever. In a cameo interview Miles elaborates that the intent for the relationship between the two was one of awkwardness and mutual respect – Oscar sees Ruby as an example of how cool a huntress could be, while Ruby respects Oscar and sees a lot of herself in him. While Miles didn’t explicitly claim anything about a potential romantic side to their relationship, he denied the intent of creating a sibling dynamic between the two.

The two protagonists share a lot of screen time together and most of it is absolutely adorable. It’s quite a popular ship in the fandom and has plenty of cute moments together, but it’s being held back a bit by Ruby’s other, much more popular ships, as well as the weird immortal wizard living in Oscar’s head.

This is my favorite shipping for Ruby and Oscar. I could really see them getting together. I like two characters who act awkwardly around each other for a while, but then develops into something more. Other than Lancaster, there is no other boy more perfect for Ruby.

Please do White Knight next. After what they went through together in the Void, the chances are stronger than ever that this will happen. Plus, it become extremely more popular