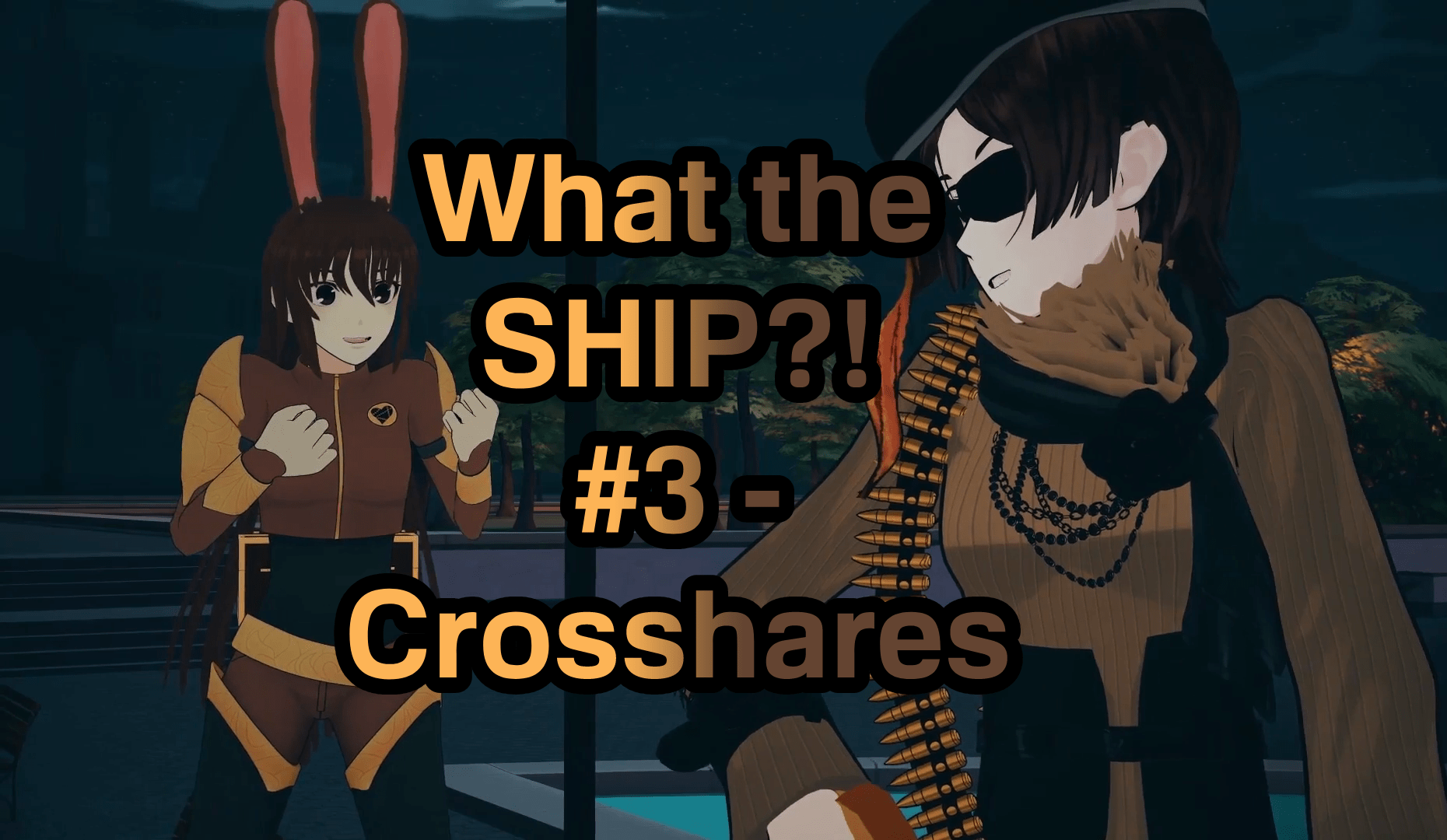 Welcome to What the Ship?! – the series that introduces, analyses and evaluates the pairings between RWBY characters, known as ships. In this issue, we’re covering Coco Adel’s most popular ship – Crosshares – just in time for her birthday!

It’s the ship between Coco Adel and Velvet Scarlatina – teammates of team CFVY. The name comes from Coco’s emblem and belt-buckle being crosshairs, and Velvet being a rabbit Faunus. While rabbits and hares are different species, it works out for the pun. Couple that with the fact that Coco primarily fights while shooting and you get a name that cleverly evokes the imagery for both Coco and Velvet.

How do I put this…? We don’t see them together for too long, even if they are teammates. Although Velvet is in the show since Volume 1, Coco debuted in Volume 2, alongside her teammates Fox and Yatsuhashi. Specifically, she first spoke lines and interacted with Velvet in V2E12 “Breach”, handling a whole bunch of Grimm by herself and telling Velvet to not waste her weapon she spent a semester building up. She does slap her other teammate Fox on the butt in an encouraging fashion, but as we later learn it won’t lead to anything with those two.

In V3E4 “Lessons Learned” Velvet cheers for Coco and Yatsuhashi and is understandably upset when Coco is eliminated by Emerald, even whispering “Coco…” out of disbelief. V3E11 “Heroes and Monsters” gives us a little bit more, thankfully. Coco finally suggests Velvet let loose with her weapon and when her friend gets knocked down she shouts Velvet’s name in concern. This wouldn’t be too important, but this scene has the exact same formula twice before, both with popular ships in the fandom – Iceberg (Weiss and Neptune) and Renora (Ren and Nora). Weiss gets knocked down, Neptune shouts her name, then Ren gets knocked out and Nora shouts his name. Given that Renora is about as confirmed as you can get, and Iceberg was one of the more popular Weiss ships at the time, it could be assumed that having those three pairs repeat the same thing was intentional.

And that’s it. We have literally not seen neither Velvet nor Coco since, so there’s not much more to this ship.

Number of lines spoken between Velvet and Coco : 7 lines.

Number of “looks” given to one another: 1 look.

But it turns out this isn’t the end for those two. After all, we have two whole canon books full of material to get through. Let’s get going!

How is it portrayed in the books?

Even in the first chapter of “RWBY: After the Fall”, the two exchange more lines than in all of the show’s episodes combined. Coco genuinely cares for Velvet’s safety during the Fall of Beacon, while Velvet is disappointed her team leader doesn’t fully trust her capabilities. We can also see that Coco is a bit more serious around Velvet, while the rabbit Faunus can be pretty playful – when Coco says that Velvet used up all her strong weapons, Velvet snaps a photo of Coco’s weapon and sticks her tongue out. In chapter 2, Velvet has an outburst directed at Coco, and the latter’s response of saying she’s the boss. While the heightened emotional drama is a result of an external force, as those who have read the book know well about it, this exchange does show that Coco and Velvet don’t see eye-to-eye in everything, especially when it comes to leadership and what does it mean to be the person in charge.

Chapter 3 gives us team CFVY’s initiation and how they all first met. Velvet hoped she’d be paired with Coco – the Faunus girl was impressed by her classmate’s confidence and popularity. Although the pairs ended up being Velvet with Yatsu and Coco with Fox, Crosshare did get its canonical start from this initiation – Coco saved Velvet from a Boarbatusk. This chapter is also special because it’s the first one that canonically confirms that Coco is a lesbian as even in school she was known for breaking girls’ hearts.

The following two paragraphs have spoilers for the book RWBY: After the Fall.

In the following few chapters the same story beats follow the previous ones – outside forces cause stronger emotions and during this time Velvet lets it slip that she doesn’t believe Coco is a good leader, while Coco is being too overprotective of Velvet. This lack of trust is an issue that CFVY faces time and time again in the first book, but it’s not all gloom and doom. In the chapter 12 flashback to the mission in the Lower Cairn, Coco, after much arguing with her team just moments before, volunteers to jump into a dark cave despite her claustrophobia just so an injured Velvet wouldn’t. She even gives Velvet her prized sunglasses, as a clear show of trust. This continues in chapter 13, with Coco being a more appreciative and supportive leader, especially to Velvet and her creative solutions to problems.

Chapter 17 is the Crosshares chapter. The two girls have a deep heart-to-heart while also trying not to die against a massive Blind Worm Grimm. After some touching moments reminiscing their lost friends, Coco sacrifices herself and saves Velvet from being eaten alive. In chapter 19 Velvet pays her back and saves Coco by cutting open the Worm, with the team’s leader literally falling into the arms of her teammate. She even compliments Velvet and gets her to blush! Finally, the two have practically half of the epilogue to themselves, discussing the events that transpired and how far they’ve come. It’s all just so sweet, and it’s only the first of two books.

We don’t get too much Crosshares content in the second book, “RWBY: Before the Dawn”. Velvet and Coco spend a large part of the book separated and, due to the massive cast of characters, both have less “screentime” overall. Still, in chapter 7 we do get a nice moment where Velvet, ordered to continue an unfair fight, gets saved by her old and new friends. The first one to stand up to her, however, is still Coco. Chapter 10 has Coco and Velvet separated again, but Velvet is constantly on Coco’s mind when it turns out the Faunus partner might be in danger. They don’t have too much interaction later on, and I personally have no wish to spoil the new book anyways, so let’s just conclude that the book’s climax has Velvet fighting off Grimm with a copy of Coco’s gun and leave it at that.

Of course, counting the number of lines between characters in a book is a whole different story, only a crazy person would do something like that.

Lines are counted only if the recipient of the line is clearly the other person or the recipient is obviously reacting to the line. Lines in the book are only counted if they are said out loud, not thought.

It is the most popular ship for both Velvet and Coco. Considering that they are as far from the main cast as possible in the show that comes to no surprise – neither Velvet nor Coco really gets anything close to a shippable partner in the show. In the books that’s a different story. Velvet gets quite a lot of time together with Yatsuhashi, while Coco spends a lot of her time chasing the approval of older women in the story – Slate in the first one and professor Rumpole in the second. That’s not to say they don’t spend time together – quite the contrary – Croshairs is felt strongly, especially in the first book, and their strengthened bond continues in the second book.

Their dynamic is truly a fun one – time and time again Coco is protecting Velvet, even sacrificing herself more than once. Velvet, on the other hand, wants to prove to her leader that she does not need protecting, and is as capable as anyone on her team, although she still recognizes and appreciates Coco’s effort.

At the time of publishing, Crosshares have a strong showing of 444 works, which is extremely impressive as there’s slightly less than 1000 works featuring both Coco and Velvet altogether. In comparison, Scarlet Knight (Jaune and Velvet) have 107 works, Black Velvet (Blake and Velvet) have 77, Splitting Hares (Yatsuhashi and Velvet) have 40. On Coco’s side, we have… Well, not much. No other Coco ship breaks 50 stories, which means that Crosshares basically sunk all other ships on the starboard side. The popularity of the ship is even more impressive when you consider that neither of the girls is anywhere close to the main cast and haven’t been seen in an episode of the show for over 5 years. Sure, the books and RWBY Chibi help, but the fact that their numbers come close to Nuts & Dolts, a ship involving one of the main characters and someone who’s been around her since Volume 1, you have to commend the Crosshares fans for holding on and supporting their favorite pairing.

Considering they aren’t at the forefront for most of the show, it’s hard to exactly gauge how CRWBY might feel about this ship. We do have official art for Amity Arena that you’ve seen above, as well as this neat t-shirt with the two.

And what does the writer of the books, E. C. Myers, think about the ship? He gave these characters so much life, that his opinion is definitely worth hearing out. Well, as it turns out, E. C. Myers wasn’t too into the RWBY shipping scene when writing these books and he didn’t go out of his way to sail with, or past, any ships, as seen in his Reddit AMA. Since its neither a hard confirm, nor a denial of Crosshares, CRWBY’s opinion of the ship isn’t too important when discussing it.

The two interact a lot throughout the books, easily compensating for the lack of it in the show. Coco’s protective nature and Velvet’s desire to prove herself make them quite an adorable couple, which isn’t more popular only because of the show’s lack of focus on these girls. Let’s hope Volume 9 and later will fix that.