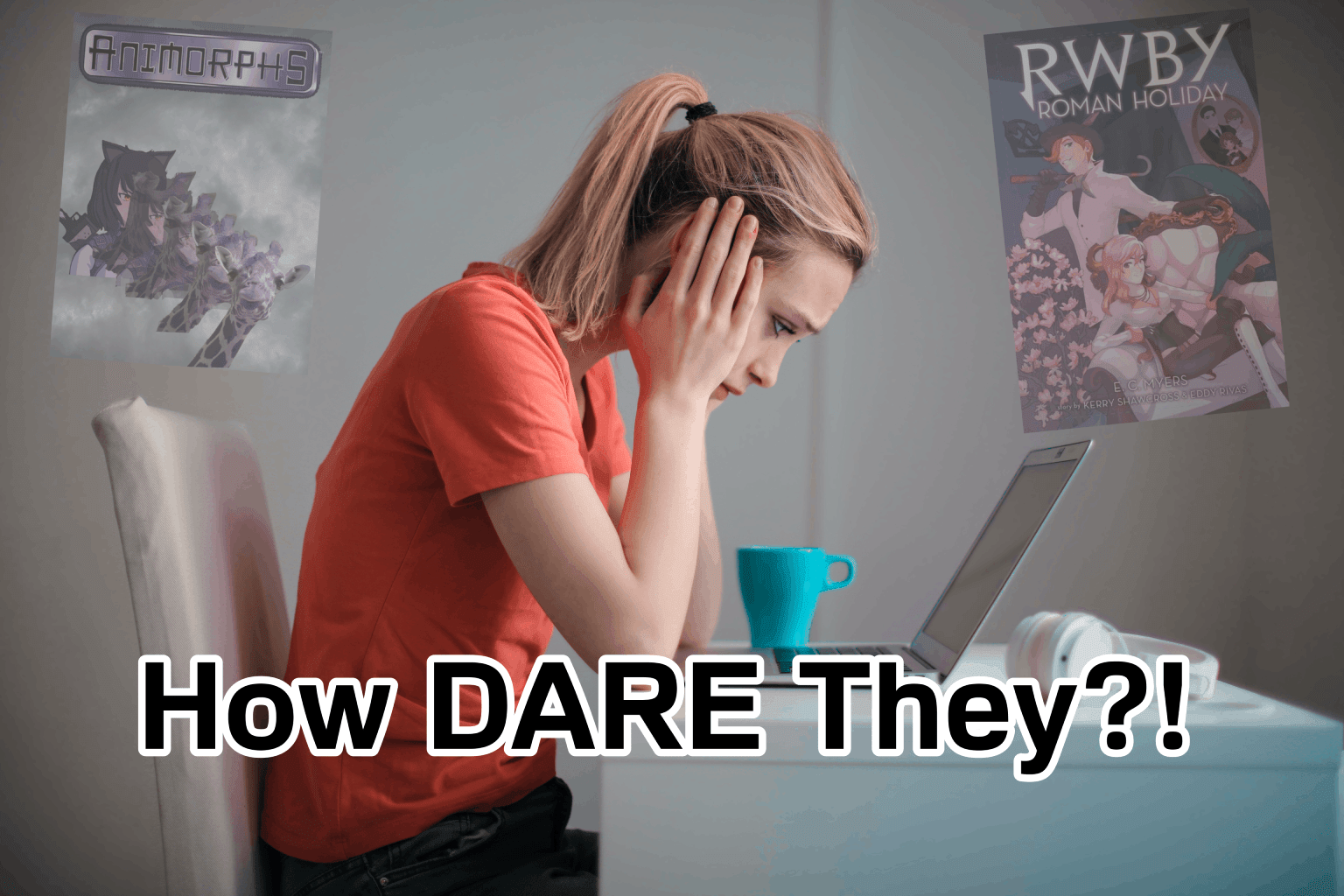 Barbara J. Johnson, better known on the internet as PeaceOrRemnant, is furious at Rooster Teeth for deciding to endorse a third RWBY book written by a real writer, rather than her fanfiction. According to her, the company is making a “grave mistake.”

RWBY: Roman Holiday, the third official RWBY book by author E. C. Myers, with story by RWBY’s writers Kerry Shawcross and Eddy Rivas, is set to release on September 2nd, 2021, and, according to the cover, will be about Roman Torchwick and his assistant Neopolitan. While we don’t have any more details other than a low-resolution cover and the name itself, fans are already exchanging exciting theories on the books contents in eager anticipation. Barbara isn’t one of them.

The prolific fanfic author is admired by fans worldwide for her 642,000 word epic “A Twist Of Fae”, which is set in Volume 2 of RWBY with all antagonists taking the protagonist roles and vice versa, fighting against the characters of the early 2000s Italian-American cartoon Winx Club. PieceOrRemnant’s latest creation that’s also getting a lot of traction is a still-developing story called “Faunimorphs”, where the RWBY cast is inexplicably sent to Earth and become part of the cast of the series Animorphs. In a universally acclaimed move, Blake eventually becomes a Giraffe.

We talked to Barbara about her resentment of the upcoming book. “If Rooster Teeth ever bothered to read what their fans wrote, they’d immediately learn that I’ve already published a story called Roman Holiday. And yes, it’s a story about Roman Torchwick and Neo. I am trying to get a lawyer involved to protect my copyright, thank you for asking.” Not only has PeaceOrRemnant already written such a story, according to the author hers is bound to surpass the official release. “They should have just handed me a contract instead of plagiarizing my work. I swear, if any of my plot points end up in that book of theirs, I’m suing!”

Barbara’s Roman Holiday story loosely follows the plot of the 1953 movie of the same name, only with Roman Torchwick and Neopolitan as the main characters, along with other small changes. “I’m really proud of that story, you know? Even have a few good plot twists in there – in chapter 36 She-Ra falls in love with Neo, who’s actually Ruby’s mom. It’s a truly complicated love story. There’s also plenty of cocaine-driven sex if you’re into that thing,” she added, nonchalantly.

When asked if she’s going to read the official novel, Barbara scoffed. “I’d feel insulted if I did! It’s bound to lack the effort, finesse and deep meaning of my works. In my Roman Holiday, even the name has meaning! Did you know that Roman Holiday means pleasure derived from others’ suffering? Like when the Romans went to celebrate and watched the colosseum where people died. Well, in my story, Roman and Neo go to the colosseum and witness a gladiator fight between Blake and Yang. The meaning is meta too, since I also derive pleasure from the suffering of Bee shippers.”

Roman Holiday by PeaceOrRemnant, featuring incredibly graphic and frankly disturbing depictions of fornication, is still available for everyone to read on AO3. “Go read it before my lawyer tells me to take it down,” Barbara warns her loyal readers.