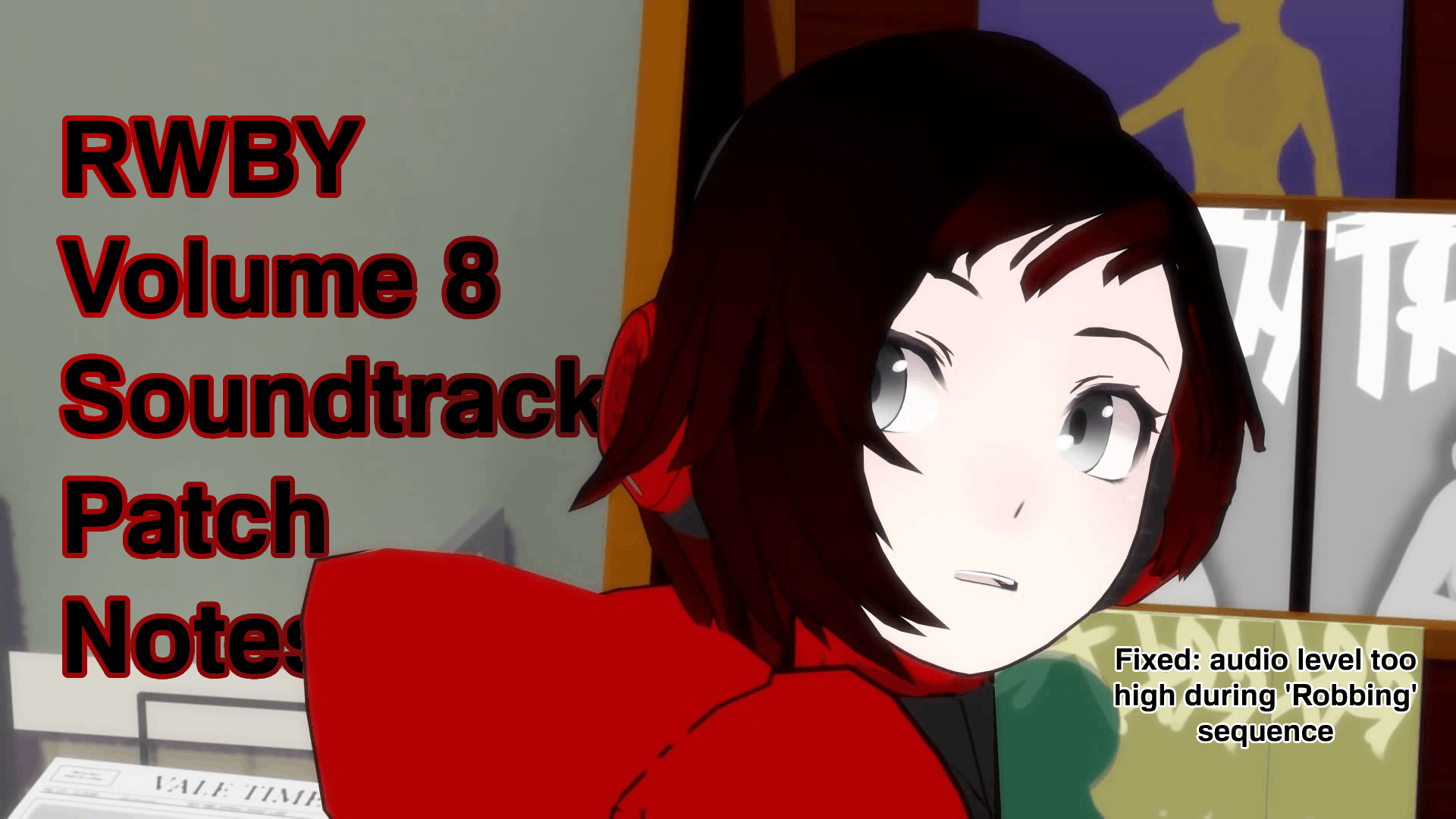 On New Year’s Eve the RWBY community was shook, in a good way for once, with a surprise release of the long-awaited Volume 8 soundtrack on Apple Music, Spotify and this guy’s car. While the festive mood was certainly improved by the fantastic music, courtesy of Jeff Williams, Casey Lee Williams, Alex Abraham and others, several keen listeners noticed something was off about the OST. No, it wasn’t the great vocal tracks or the incredible episode score, but something else entirely. It seems like there just were few new songs in the soundtrack.

Thankfully, Rooster Teeth has promised to fix any problems with the OST by releasing a post-launch launch patch and paid downloadable content (DLC) coming later this year. Now, what problems could have people found with the admittedly great soundtrack? It has something to do with the quantity of music, not the quality.

Statistically, the number of songs (without including the remix or episode score) is fine – Volume 8 has seven songs that fit this criteria, tied with Volume 5 for least songs in a Volume. Volume 5 is also considered by some to be one of the better, if not the best, soundtracks of the show, so seven songs is not a big deal by itself. However, you also have to take into account how new the songs are. Here’s the situation: of the seven vocal non-remixes in the album, Friend was released last year as a single (not a big deal since ending songs are always played in full during the credits sequence anyway), Awake was released by OK Goodnight in 2020 (and fans of RWBY music are already more likely to listen to the lead singer Casey’s band) and The Truth doesn’t even last a minute and is heard in full during Episode 6: “Midnight”. Which leaves the soundtrack with only four full new songs – a bit too little than what we’ve come to expect, especially after how lavishly we were treated by Volume 7’s OST, which included eight full new songs.

To fix the number of songs and other issues, Rooster Teeth posted the upcoming patch notes for the soundtrack, as well as plans for paid DLC. Here they are:

For Every Life – The opening song of the volume remains mostly unchanged, except for a minor addition. Our surveys show that lower ELO listeners didn’t understand the ending of the Volume, so to better increase the community’s comprehension there will be a message playing in a barely-audible frequency throughout the entire song. The message simply contains the sentence: “IRONWOOD DROWNED, HE’S NOT COMING BACK” and will definitely not include a hypnotic subconscious advertisement of the Rooster Teeth merch store.

The Sky is Falling – Lamar Hall’s mandatory rap segment accidentally was too comprehensible and somehow slower than the rest of the song. We buffed it by speeding it up three times to fix this problem.

Be Strong and Hit Stuff – we thought it was obvious that this was a Nora song, but some fans keep claiming that it suits Emerald as well. Considering we don’t think Emerald is yet good enough to get a song for herself (no, that one in Volume 3 doesn’t count), we will fix this issue by adding the motif from Boop that plays every eight seconds.

The Truth – we weren’t sure about the possible response to the song and released a teaser in the album. Seeing how many fans wrote us that they want to hear more, we’re releasing the rest of the song later this year as DLC.

Treasure – not enough people complained that we added a Bumbleby song, which means people didn’t notice that it’s about Blake and Yang. To remedy this, the song now includes the entire of Bmblb from Volume 5’s soundtrack right in the middle.

Friend – this particular song made too many people cry and we are removing this song from the album as a result. Don’t worry, as its spot will be replaced by Mirror Mirror Part 3 as downloadable content, since we feel like Weiss doesn’t have nearly enough songs.

Awake – due to a licensing issue, we received a DMCA claim against this song and will be replacing it with a brand new song about Jaune’s sadness over Pyrrha’s death. This song will also be available as DLC later this year.

About the DLC – we are happy to announce that for the first time ever, we will be launching additional content to the soundtrack, exclusively to the Epic Games Store! You can buy the Truth Part 2 DLC, Mirror Mirror Part 3 DLC and the Man, It Really Sucks That My Girlfriend Died DLC separately for $2.99 or as a bundle in the RWBY Volume 8 Soundtrack Season Pass for $7.99. Pre-order now and receive an exclusive phone wallpaper! Check out the preview!”

What are your thoughts on the patch notes? Will you be getting the DLC? Why does Jaune have a beard there? Let us know in the comments!