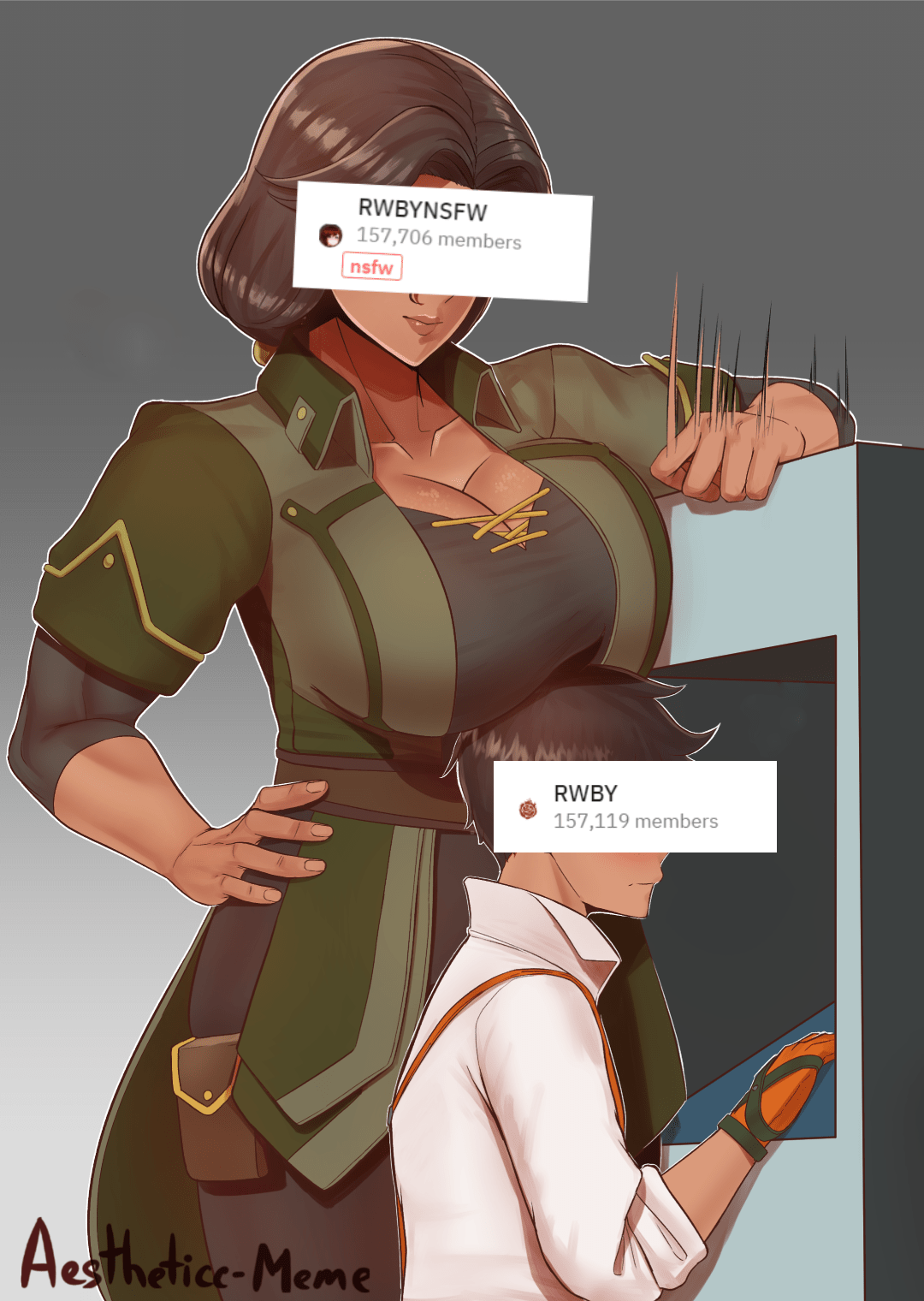 Editor’s note: today’s article is about a topic intended for audiences of 18 years or older. If you are younger or not comfortable with the subject matter, feel free to check out any of our other articles! Regardless, we will not be including any outside links or explicit images in this article.

Anticipated by some, but shocking most others was today’s announcement that the /r/RWBYNSFW subreddit has officially overtaken the main /r/RWBY subreddit’s subscriber count. What does it mean and why did it happen? We’re diving in deep to find out. Plus, we have an exclusive interview with a famous RWBY fan artist – Aestheticc_Meme!

To see that, we have to compare some numbers for the NSFW (Not Safe For Work, slang for explicit content) and the main subreddits. First, let’s look at the subscriber count – at the time of writing, /r/RWBY has 157,107 subscribers, and /r/RWBYNSFW has 157,571. The difference is really tiny, but is likely to grow. So, 157,571 against 157,107 – the NSFW definitely has the main one beat. Subscribing to a subreddit means that its posts will be displayed on your personal front page of Reddit and it can only be done by registered users. This number is particularly fascinating since people are naturally less likely to subscribe to NSFW subreddits – the social stigma surrounding lewd art and the general inconvenience of having posts of this type being displayed on the front page of the website is enough for some to not consider subscribing to 18+ subreddits.

Next, let’s see the number of posts per day – according to the website subredditstats.com, this past month /r/RWBY on average had 35 posts per day, while /r/RWBYNSFW had 15, as you can see in the graph below. As for comments per day it’s even bleaker for the NSFW subreddit – an average of around 360 against 45, in favor of the main subreddit.

I won’t bore you further with numbers, but the truth is quite obvious – the porn subreddit has more subscribers, but fewer posts and even worse engagement. Lots of eyeballs staring, few people contributing or commenting. Which… is actually par for the course if we’re talking about NSFW content on Reddit. While nobody can see which subreddits you are subscribed to, everyone can see what subreddit you posted for or commented in, so NSFW content gets a fraction of comments that regular posts do. Even though it’s difficult to say for sure, we can conclude that the lewd subreddit is at least as popular as the main one.

What could have caused this?

You have to admit – it’s pretty strange for a forum dedicated to obscene parodies of a show to become more popular than the forum to discuss the show itself, especially when content like that is practically non-existent in the source material. So there must be a reason, right? Multiple, in fact.

First things first, it’s easy to dismiss this as simply proof that the show’s quality has been degrading and that the only thing that people care about is pornography of the characters. Another argument thrown into the mix is that the main subreddit is poorly moderated or has a less tolerant or inclusive community. While the the controversy with banning the critics subreddit didn’t help /r/RWBY, they only lost 73 subscribers during that time, not even enough to catch up to the lewd analog. Finally, both of these factors are not only immeasurable, but also heavily depend on your subjective thoughts on the show and the community. We’re not taking them into account.

What we can take into consideration is what’s being posted to /r/RWBY and why perhaps it’s not doing too hot. The subreddit is quite unique, even compared to subreddits of other fandoms, in that it almost exclusively consists of fan art. At the time of writing, the top posts of the subreddit in the last week are actually just fan art and cosplay. In fact, the top post of this week that is not an image is our latest article – which comfortably sits on the 85th spot. We can compare this to a different subreddit of similar size – /r/TheDragonPrince, the subreddit dedicated to the show of the same name. Both are western animated series distributed online during a hiatus. Looking at this week’s top posts there we can see that over a third of the top 50 are discussion posts, most containing no images whatsoever. This number would be even higher if we removed memes, which the /r/RWBY subreddit prohibits.

Now this only means that we’re 224 days into the hiatus and the FNDM is a community blessed with many talented artists and cosplayers. However, the overwhelming popularity of fan art results in that people who are looking to discuss the show with others will likely not be using /r/RWBY, but will be finding other websites to do so in, leaving mostly people interested in art subscribed there. And people who subscribe for the RWBY art might also be willing to subscribe to the other subreddit that is also basically only about RWBY art, just naughtier. Yeah, nobody’s stopping someone from subscribing to both.

One final reason to discuss is a bit funny by itself. Turns out that /r/RWBYNSFW has been expecting this result for a while. Expecting and actively preparing to be exact. For a few months there have been consistent posts encouraging the /r/RWBYNSFW community to surpass the main subreddit in subscriber count. A third RWBY subreddit, /r/FNKI, has also been monitoring the situation and making fun of it all. Basically, it feels like today we’ve seen a conclusion to a race – one community was actively sprinting, another was eagerly awaiting for the results, while the third one didn’t even know it was participating.

To conclude – yes, lewd RWBY is at least as popular as regular RWBY on Reddit. /r/RWBY has few discussions, lots of art – same as the NSFW variant. Naughty and meme subreddits actively encouraged users to join in and beat the bigger one. Speaking of naughty and meme…

One of the most well-known RWBY NSFW artists is undoubtedly Aestheticc_Meme. Our chief editor Jackson talked to him in an interview. After introductions and the initial shock of finding out /r/RWBYNSFW now has more subscribers than the main subreddit, Meme was ready to answer some questions.

First of all, would you consider yourself a fan of the show?

“Hmmmm. Kind of a hard question. I started out as a big fan cuz it was something new. Swords that turned into guns were sick af and the waifus were cute/ hot. But with the way the shows been going with the heroes taking Ls after Ls it just doesn’t feel as enjoyable to watch anymore”

Do you remember how you got into RWBY? I assume it was before you started drawing the characters, correct?

“Oh yeah that was before I was Aestheticc_Meme. I was a casual RT fan when I got into RWBY. I used to watch RVB and it was one of the seasons where Monty choreographed a lot of the now iconic fights. So when I heard that the same guy was making an anime like show I was in.”

You’ve drawn plenty of characters from a variety of franchises. Would you say drawing RWBY characters is any different?

“Drawing RWBY characters has sort of become muscle memory for me with how much I’ve drawn them. Tho I haven’t drawn any lately cuz my interest for the show has dwindled as I mentioned before.”

Do you have a personal favorite RWBY character in general? What about a favorite one to draw?

“My personal fave is probably tied between Nora and Pyrrha. Nora’s personality is great and both their designs are really pleasing on the eyes. Fave character to draw would probably be the ice cream tho lol. Something about her just makes me go awooga.”

Do you have any final comments, to your fans or to either of the subreddits?

“Nice job r/rwbynsfw! And r/rwby don’t be so stuck up all the time”

Our sincerest thanks to Aestheticc_Meme for this interview and the countless fantastic drawings he’s made. You can find him on Twitter @Aestheticc_Meme, just keep in mind that the art posted is absolutely not safe for work.