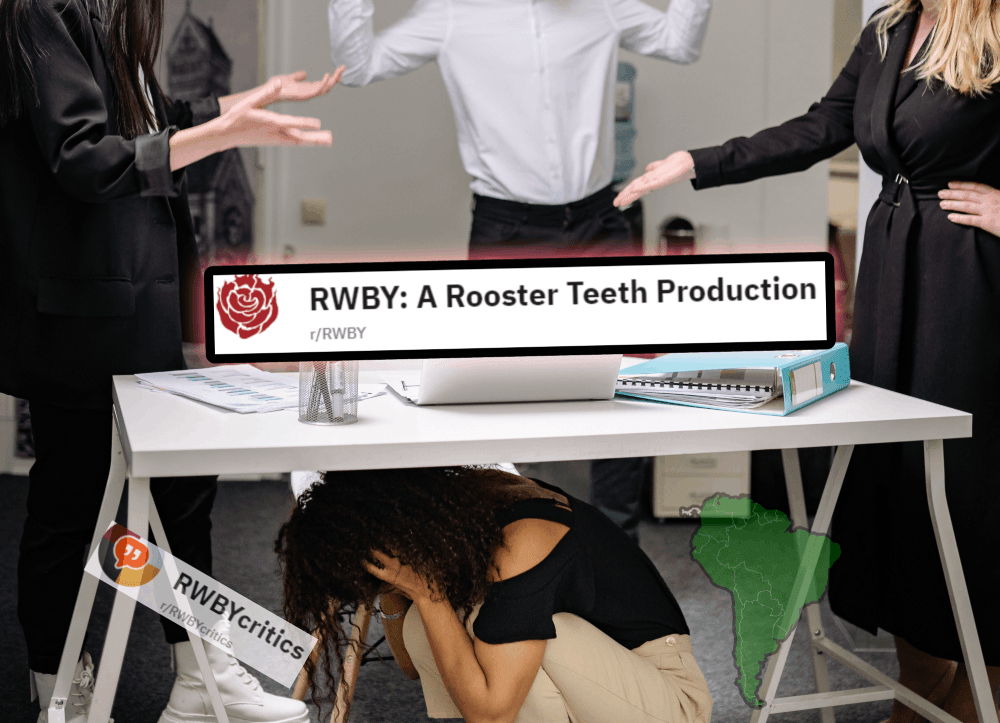 Yesterday the RWBY subreddit /r/RWBY community was shocked to see a new announcement by the moderators which banned users who were actively participating in the /r/RWBYcritics, as well as everyone in South America. In a post menacingly titled “Update from the mods” pinned to the 155,483 subscriber subreddit, the moderators proclaimed that because users in the /r/RWBYcritics subreddit repeatedly performed malicious activity in the /r/RWBY community, that a decision was reach to ban everyone actively participating there. Examples of malicious activity included “Constant arguments with r/RWBY users, vote manipulation and comment brigades, homophobic, transphobic, and racist attacks towards users” and more. Additionally, the moderators also banned anyone who they found were from South America “as an example so that the other continents would get the idea and start behaving.” According to the post “at least one RWBY critic lives in South America and we don’t want to take any chances.”

The backlash to this decision was immediate and far-reaching. Members of both subreddits, YouTube content creators like MurderOfBirds and even RWBY writer Eddy Rivas spoke against this decision. Although few could deny the awful actions made by some bad-faith users, many felt this blanket ban of all active /r/RWBYcritics members and people living in South America was a bit too much.

We spoke to a person who wrote two comments on two separate threads and even started a three-comment discussion on Twitter, a member of both communities under the username /u/qrowsfeetpics. They explained their confusion when first seeing the announcement. “I think the moderators took things a bit too far and yet didn’t explain nearly enough. A lot of users, me included, were worried that we might be considered ‘active’ users of the critics subreddit. I have posted there a few times, but I’m not subscribed or anything. I also post criticism on the show in the main subreddit. Does that mean I could be banned? I’m also half-Peruvian, so do I get the ban along with the rest of South America, or just a temporary suspension?”

It appears that the backlash was enough for the moderators to reconsider their judgement upon those who dared criticize RWBY or live in the Southern Hemisphere. Today the moderators have posted an apology thread efficiently titled ‘An Apology and a Retraction of Yesterday’s Rule Change‘, which, unlike their previous post, did not receive thousands of downvotes. In the thread, they unbanned all /r/RWBYcritics subreddit users that were banned by yesterday’s rule and vowed to never do so again. Among other things, they clarified their reasoning for creating such a rule in the first place, owned up for their mistakes, promised to soon accept new moderator applicants and claimed that the mod responsible for posting the ban announcement, /u/AutoModerator, will commit seppuku to preserve the team’s honor. The moderators refused to elaborate whether /u/AutoModerator is an actual person or a site-wide moderation tool. They also did not respond to questions about potentially unbanning the entire continent of South America.

Update: although both Reddit posts made by the moderators do not mention South America anywhere, we cannot be sure if we received false information or the mentions of the continent were edited out and simply swept under the rug.

Ah, so they want to make an example out of a whole goddamn continent. They sound like dictators nuking a continent in preparation for taking over the world.

“Additionally, the moderators also banned anyone who they found were from South America “as an example so that the other continents would get the idea and start behaving.”

This seems like dictatatorship, especially since this is the type of thing that Putin has said.

At the end of the day, what the mods did was blatent racism.