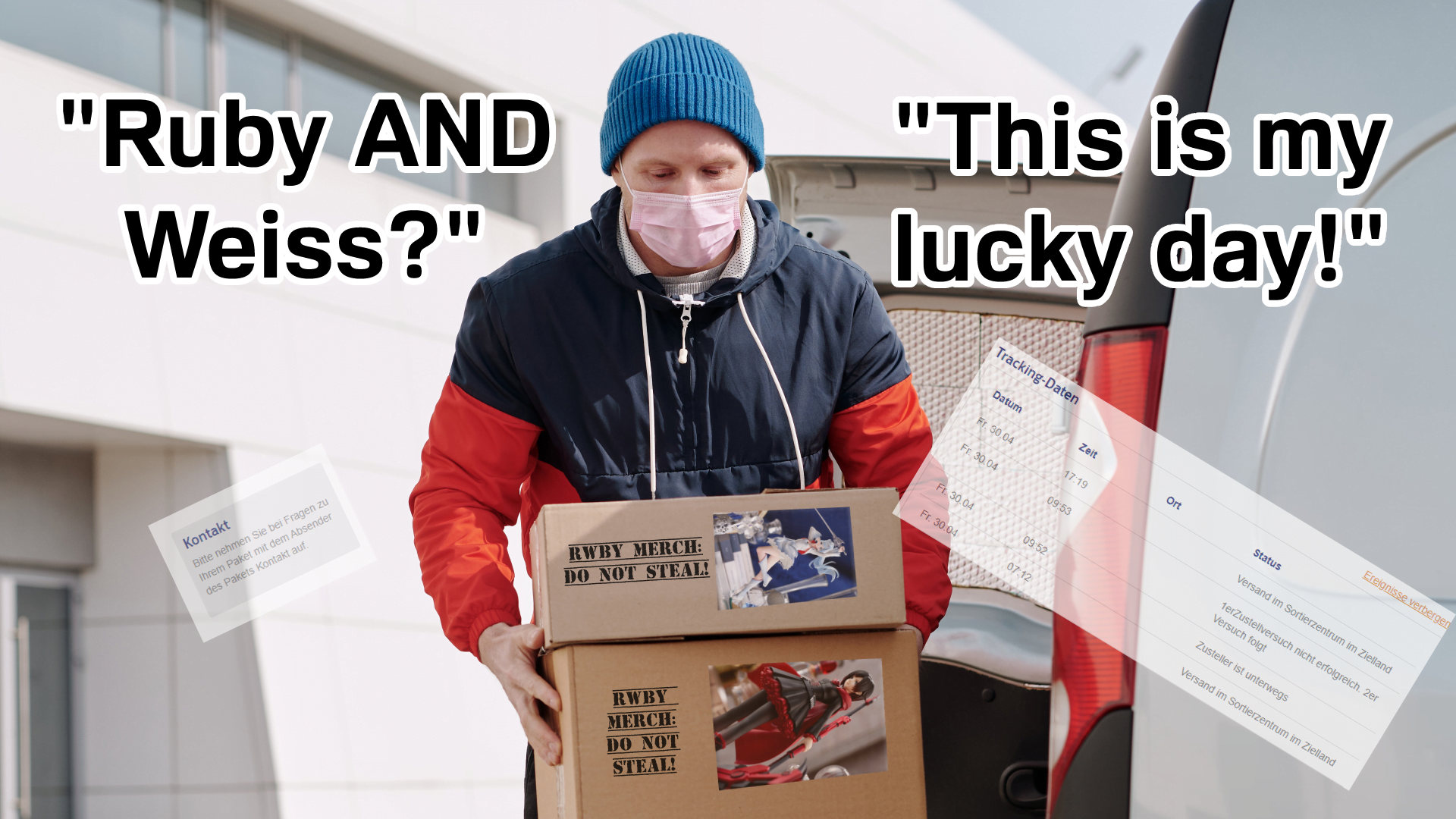 RWBY fans already got it tough, since, you know, they’re fans of RWBY, but that’s especially true for anyone living outside the US. High prices for shipping and ridiculous customs fees for any official merch, weaker presence at conventions and local stores means RWBY fans in Europe, South America, Asia and the other three continents that start with A have to be either really patient or really rich. Well, I’m not a rich person, but my patience is running thin.

Once I’ve seen the incredible (and almost affordable!) Pop Up Parade RWBY statues, I just had to get them. Of course, best girl Weiss immediately found herself in the shopping cart, but it’d be lonely for just her, so I bought Ruby for her as well. I believe I also bought one more Pop Up Parade Ruby statue as well, but I don’t remember adding her to cart. “That’s alright”, I figure, they’re gonna arrive soon enough. That was on January 30th.

The figures were supposed to come out on March 29th, but an unexplained (and unannounced) delay pushed the figures back to April 22nd, when they were finally shipped out. I waited for those figurines almost as bad as the time my dad said he’d be right back before he moved the manhole cover and went inside the sewers half-naked in broad daylight. Fortunately for me, my dad didn’t take 2 weeks to arrive home.

After 9 days of near-constant refreshing of the page of the apparent couriers, PostNL, I see that the package is finally on the way to be delivered to me! Coincidentally, April 30th is International Jazz Day. For me, however, it was the day that the music completely stopped. One minute after posting that the package is on the way, PostNL claims that I wasn’t home and they couldn’t deliver to me. Unless the company’s been running from the living room of my next-door neighbor, I sincerely doubt PostNL could make the trip from their storage facility to my apartment door in a single minute. Not to mention, due to me working from home I was there the entire time. Not a single doorbell was rung. Not once did my phone sound the call of the delivery person. I was left completely alone, figureless, without even an attempt to rectify it.

I figured it must have been a busy day and they’ll deliver later. Figured I should just wait. Unfortunately, waiting never helped anyone get their RWBY figures back from the clutches of an evil delivery company. The support for PostNL consists of contacting the seller (who began to completely ignore me) and nothing else. Once I pretend I’m the seller, I can get some more info out of them – like that the delivery could be repeated after two working days and that on failure to deliver, a card with contact information and instructions is always left behind for the recipient.

Alright, wanna see how you did? Yeah, you did great, pat yourself on the back! Take a breather, then come back to finish the article. In the meantime, enjoy these two fabulous figures that I still don’t have.

I attempted to contact PostNL one more time, but was intercepted by their Dutch customer service robot. After a pleasant enough conversation, the robot told me to wait until Sunday and also have some good time together? I’m not too sure on the details, since the Dutch customer service robot only spoke Dutch, a language I can’t comprehend, but my experience warranted leaving 4/5 stars during its routine service evaluation.

PostNL, if you’re reading this, I beg of you to return my figurines the delivery people took from me. I will give them a good place, next to all other RWBY friends. I know that they’re probably big fans of the show and wanted to show their support in the only way you could in Europe, but theft from fellow fans isn’t the way. There aren’t that many European fans of the show (<10% of this website’s readers are European, in fact!), I get it. We could sit down at my place, have some tea and discuss why they hated Volume 7 so much. After all, they already know my address.

UPDATE: After a brief conversation with a non-robotic PostNL employee, I was told that they only handed over my package to a different company and bears no responsibility over the theft of my precious figures. The article has been corrected to reflect that information.

SECOND UPDATE: The figurines were successfully reunited with their rightful owner, me. It only took 6 weeks for the figures to reach me.