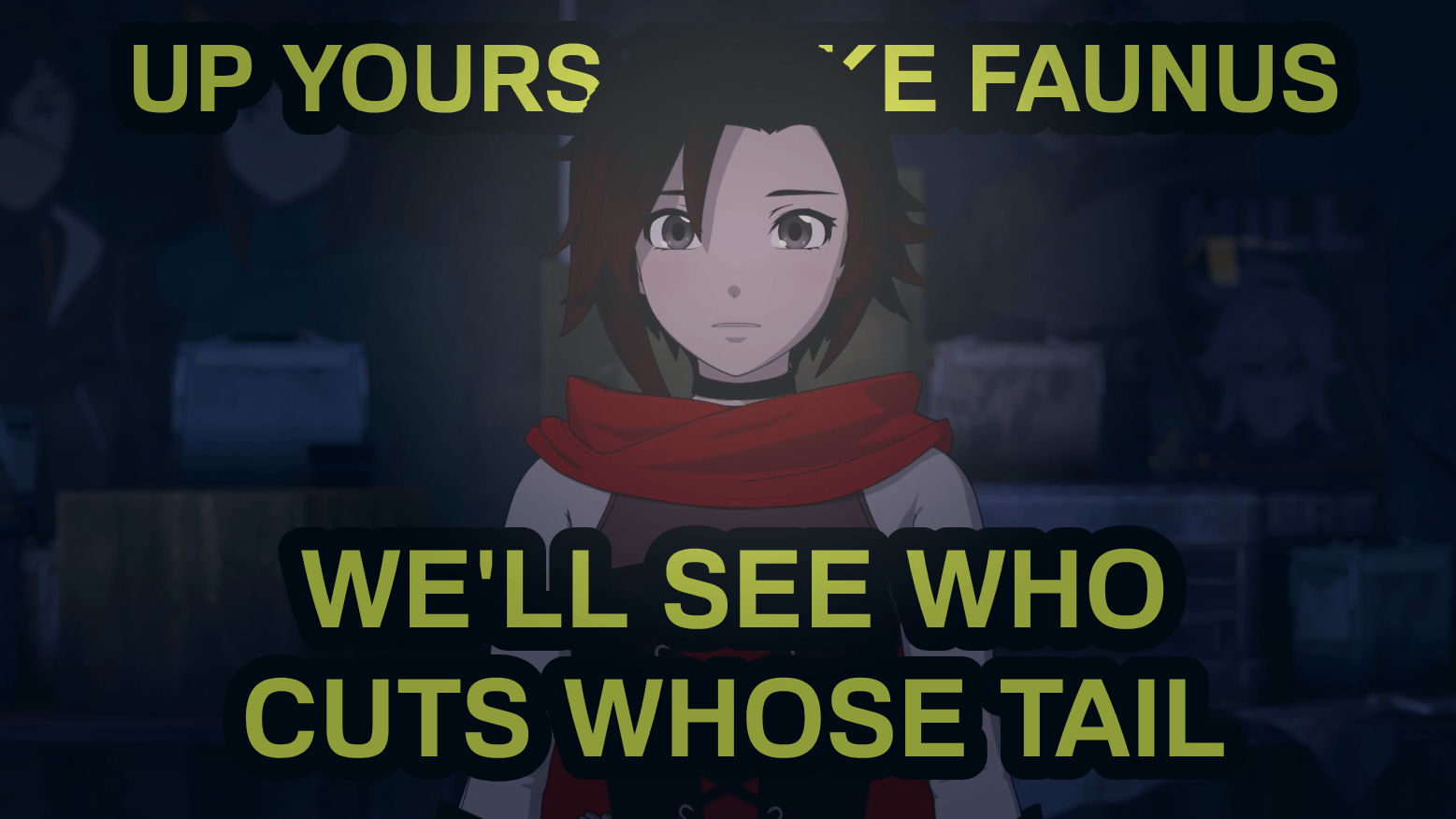 Whoever knows me personally, also knows that I’m a man who speaks what he thinks. I’m not gonna pander to the masses, and I will never talk only what others want to hear. For the last week, I held out. I tried avoiding the topic altogether. I didn’t want to offend anyone by simply stating my opinion. But no more. I have my firm beliefs. And I don’t care if I get cancelled from this.

I think Ruby isn’t as bad as Tyrian for cutting off his tail.

Did that trigger you, snowflake? Well, let me post one more.

I also think Ruby cutting off a serial killer’s tail in self-defense should not be compared to a homicidal cult leader cutting off a teenage girl’s arm for protecting her teammate.

You don’t like my hot opinions? You can cry about it. Plenty of you did. I see you, in your YouTube videos, saying that Ruby is a monster for cutting off a Faunus tail, because for a scorpion that really stings. Pun intended – I intend all my puns like the Alpha Beowulf that I am. Well you can have your YouTube platform, because they clearly are afraid of people like me and ban us for sharing our ideas. Just like they did after I shared my opinion that team RWBY isn’t absolutely evil for not immediately submitting to the commands of a dictator who planned on completely eliminating the entire lower class.

Even after they got rid of me from Instagram, Twitter and even Parler (that one’s deserved, I posted a lot of pictures of shirtless old men), they still can’t silence me. I have this website as my final platform of free speech. And here I complied all my opinions that triggered so many people, I was being cancelled just for breathing. Here goes:

After my manifesto, I expect most of you are already clutching your pearls and sobbing on the floor, or you’re trying to rile up more social media outrage to destroy my reputation. Go ahead, I don’t care anymore – I will not hold back the truth any longer. And if I one day think that we should judge the upcoming RWBY x Justice League movie on its own merits, while still keeping the fact in mind that it is one of the reasons responsible for delaying Volume 9 this long, I’ll just say it!

ironwood best man he did nothing wrong he just got done dirty !