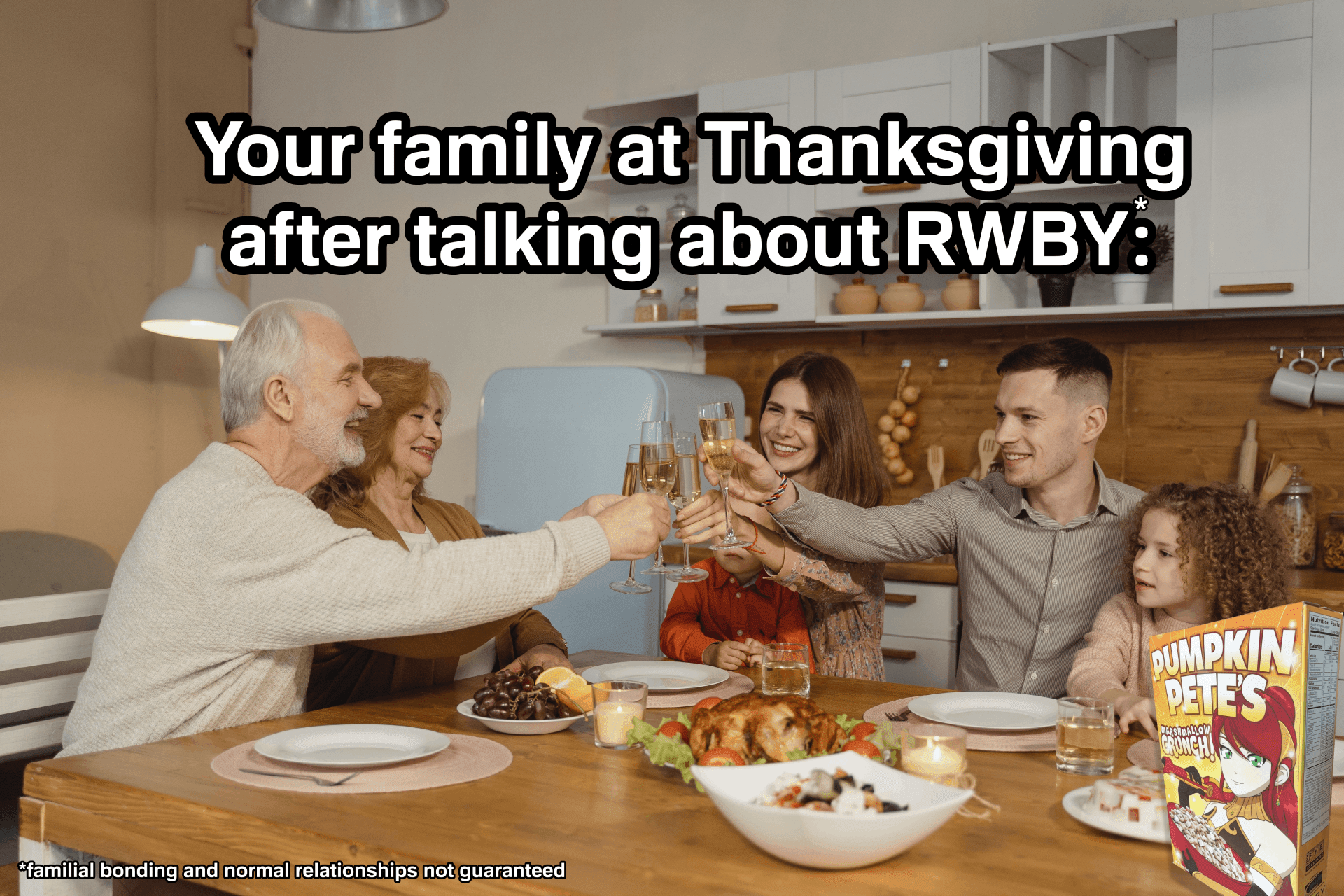 Happy Thanksgiving! Alternatively, if you live anywhere but North America, happy Thursday. It’s a common (and a bit overused) joke that Thanksgiving dinners are extremely awkward and are filled with ramblings by bigoted family members and fighting among distant relatives. Still, it wouldn’t be a joke if that actually didn’t happen to quite a lot of people and, unfortunately, it doesn’t seem to stop. Although due to obvious circumstances last year had a much quieter Thanksgiving, this time around people are more willing to travel and, unfortunately, are ready to unleash two years worth of political opinions and strange obsessions.

Thankfully, if you’re reading this, you might have a strange obsession yourself. And while usually being a fan of RWBY means ridicule from family members (if not society outright), this time you can be the one who’ll make things awkward at the table. After all, your relatives can’t get into a fight on who should be the U.S. president if they’re too confused from hearing your ramblings. And it’s not like they can get up and not hear you out – the turkey hasn’t been served yet.

I’ve divided the possible topics of conversation (or more appropriately monologue) into categories, based on how boring, befuddling or flat out insane they are, especially to those that don’t know RWBY exists. Use category 1 when things are just a bit awkward, while resort to category 3 only to avoid relatives throwing food or fists at each other.

Category 1: Use these mild takes for those slightly awkward pauses after personal questions, cringeworthy remarks (“Look who finally got out of their cave!”) or when your cousin begins complaining about how there’s too many genders these days. They’re good conversational palette cleansers. Well, not really, but they get the job done.

Category 2: Use these hot takes for when someone begins raising their voice to start an argument, shares a really embarrassing personal story, or someone has been ruining the mood after a few too many alcoholic drinks. Everyone will probably be looking at you, though that’s not really a good thing…

Category 3: Use these only as an emergency! Situations similar but not limited to shouting, screaming, hairpulling, turkey throwing or a grandma who’s about to use the N word. Keep in mind, while these will definitely divert the attention towards you, the attention won’t be of the positive kind.