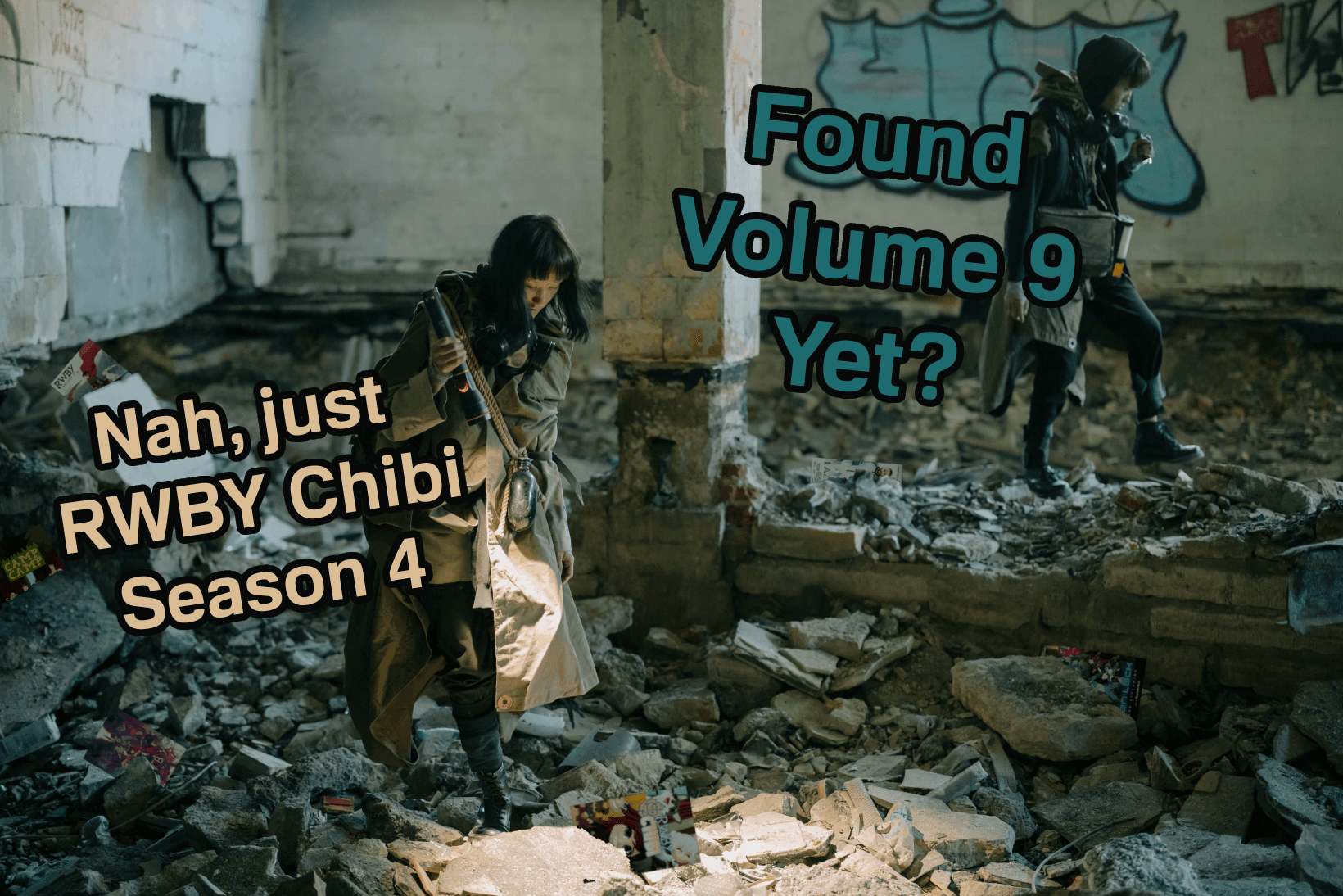 It’s chaos inside the RoosterTeeth Headquarters in Austin Texas, with people running frantically, most crouched and looking straight down. And no, this isn’t just a case of a young startup full of Gen Z employees glued to their phones with their terrible postures – this crisis is much more serious than scoliosis. They’re looking for RWBY’s Volume 9.

To be precise, they’re looking for a lost USB key that contains the only backup to the entirety of web series’ RWBY 9th season, which has been delayed without further news for over half a year. According to Nat, an employee in the company who wished to remained anonymous and will be referred to by this made up name, this has been going on for over a month and is the primary reason why Volume 9 still isn’t out.

Apparently the loss of the backup is only the last in a series of misfortunate events that keep Volume 9 from releasing ever since it was completely finished in the middle of January.

“First, one of our employees, who’s name starts with ‘B’ and ends with -ill decided it was a great idea to insert a USB key found in the HQ’s parking lot into his work computer. Immediately after he did that, the entire company suffered a massive ransomware attack. Coincidentally, this happened right when the social media managers were about to post the announcement that V9 was coming that week,” wrote Nat during a company-issued break of 30 minutes, after which they will have to return to their USB drive searching party.

“The ransomware attack was way tougher than expected. The hackers wanted us to pay them in ape NFTs to unlock the computers. Apparently it’s easier to launder money with those than with regular crypto. Too bad all we had were lion and pixel dude NFTs so we ended up wiping all of our computers. That whole debacle cost us more than two weeks. Thankfully we hadn’t posted the release date beforehand, so nobody was the wiser and we still had our backup servers which we could easily access.”

“Turns out our server administrator was on leave and skipped this entire incident. We patiently waited an additional week for his return, after which the company learned he got into a nasty snowboarding accident in the Alps. He couldn’t remember where he was, what were his kids’ names and, most importantly, the password to the main backup server. Meanwhile the assistant server administrator kept the password on a sticky note stuck to her monitor. It came unglued, fell onto the floor and was promptly picked up as trash by our janitors. We had the backup in the server with no way to reach it.”

It seemed all was lost and they’d have to re-create Volume 9 from scratch. Fortunately, fate threw RT a bone, in a form of a paranoid ex-employee.

“So Pete (real name changed) was our animated production coordinator before he, uh, left the company a week before V9’s release, and not on the greatest of terms. Pete was a bit paranoid and did multiple backups of everything we did, including the master copies of our shows like RWBY. So the higher ups got to talk to him and paid a real hefty price for the backup of V9, which was inside of a funny-looking USB drive. They did a larger deal though, buying most of the masters for our past shows too, like earlier volumes of RWBY, Red vs Blue and Camp Camp. Pete wanted to add in X-Ray and Vav for free but the management refused. The thing was that all of the shows were inside these… fruit and vegetable vanity USB drives. Apparently Pete said it helped him differentiate. Volume 9 was in this neat little 256 GB carrot.”

Pete denies all claims accusing him of planting the ransomware-ridden USB drive next to Bill’s parking spot out of revenge to the company.

About the same time as the deal was made, Achievement Hunter were preparing a new show called Twelve Little Roosters, where the AH crew were to live, work and suffer with twelve massive roosters in their lives. In an event nobody could have predicted, they all escaped inside the RT Headquarters, wreaking havoc all over the impressively vast Rooster Teeth Headquarters. What would have been a great first episode turned to corporate hell as the roosters somehow found their way into the animation department and quickly gobbled up the tasty-looking plastic USB drives.

“Roosters can’t digest plastic or anything else that USB is made of, so we just waited. None of us knew how long a cock will digest a USB drive but it’s been over a month – clearly the drive is just somewhere in our headquarters. We managed to find most of the eaten backups, except for Nomad of Nowhere and gen:LOCK Season 2 but nobody’s been going out of their way to find them anyway.”

Nat finished our interview with this desperate plea:
“Please, we’ve been looking for a carrot-shaped flash drive for more than a month now. I just want to animate stuff, please. My back hurts and I keep seeing nightmares of carrots and removable media every night…”

It appears that everyone will have to wait a little bit longer for Volume 9. At least they’ve got time until RTX 2022!