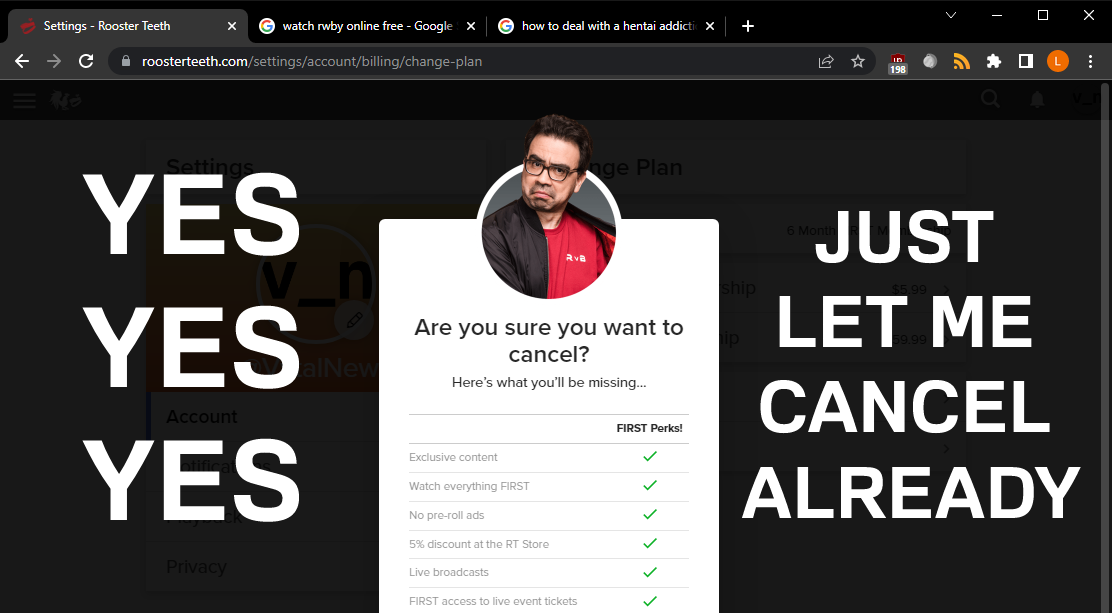 After so many former and current Rooster Teeth employees bravely spoke out and revealed all the horrifying happenings in the company (more of which you can read in our HIVE article), it is only natural that you wouldn’t want to support an abusive, torturous company run by, lightly put, horrific monsters that would rather pretend nothing’s happening than even address or admit that something is wrong in the horrifying work environment they themselves created. Oh and there’s still no RWBY so it’s not like there’s a reason you’d still be subscribed.

Unfortunately, the process to cancel your subscription isn’t as straightforward as it seems. OK, it’s pretty straightforward, but at this point the company should have a moral obligation to straight-up cancel the subscription for everyone since the only people that would still be subscribed by this point are either dead, forgot they had it auto-recurring or have some troubles cancelling their sub. If you fall into any of these categories, well, maybe not the first, this guide is for you.

First thing you’ll need is to go to roosterteeth.com and press the gray ‘person’ icon in the top-right, while ignoring all those smiling people in the background, hopefully only some of which actually dying inside due to their terrible work.

Then type in your username and password (remember to use the Forgot Password function because let’s admit it, you changed it once after you realized it wasn’t a great idea to use the same password as you did in your early teens and now you’re having trouble remembering which password you changed it to). Press the big red LOG IN button. Hopefully for the last time.

Press the top-right icon once again, this time it should be your profile avatar. Choose Settings. Time to set up this cancelling.

After that take a deep, grateful breath. You’re almost done. Okay, you’re nowhere near done but we let this little lie slide so you don’t chicken out. Press the Cancel Subscription button.

After that, go for the button Change plan. Now the difficult part: actually cancelling it. Turns out a giant company whose main revenue comes from recurring payments isn’t too keen on letting their victims, I mean customers go. Find a magnifying glass and press the tiny underlined Continue to cancel buttons below the grimacing face of Gus. Yep, RT is not above using cheap tactics like showing off your favorite content creators and series in a sad manner just to guilt you into staying.

Next they’re using iconic RvB characters, like Sarge. Make sure to press the Other reason, since it might be used for metrics and it might give us a better chance that a human being will read the reason as to why we’re leaving.

We’re still not done. This is the fun and creative part. Write down the reason as to why you’re cancelling. We suggest keeping it to less than 2,000 words. Hard mode: don’t use swear words. We even have an example below!

And we’re still not done! As a final straw, the abusive, heartless company wants you to stay so bad, they’re doing the fiscal equivalent of a kowtow – offering you a much better deal just so that you’d stay. Pathetic. Let them know you’re for real by pressing the once again tiny No thanks, continue to cancel button. Ignore the Ruby on the top of the dialogue box. She’s not there, they’re just using her likeness to get you to stay.

…and you’re done! It should now say ‘Cancelled plan’. You can now go to sleep with a clear head.

B-b-but what if I still want to watch RWBY???

Ugh, fine. If you still want to watch RWBY, you now have no way to do so. Oh no! Of course, there are ways around that, like watching illegal streams. You shouldn’t do that. Because that’s illegal. Especially stay away from sites like GoGoAnime which have episodes out usually on the exact same day of release. Also, these sites are filled with ads, and anyone browsing should use a trusted ad-blocker, like uBlock Origin. So remember to stay away from these free and convenient sites since we would never want to do any financial harm to Rooster Teeth ever!

Honestly, all the people who now rush to sites like Kickassanime that upload within a couple hours are just the of the fanbase.