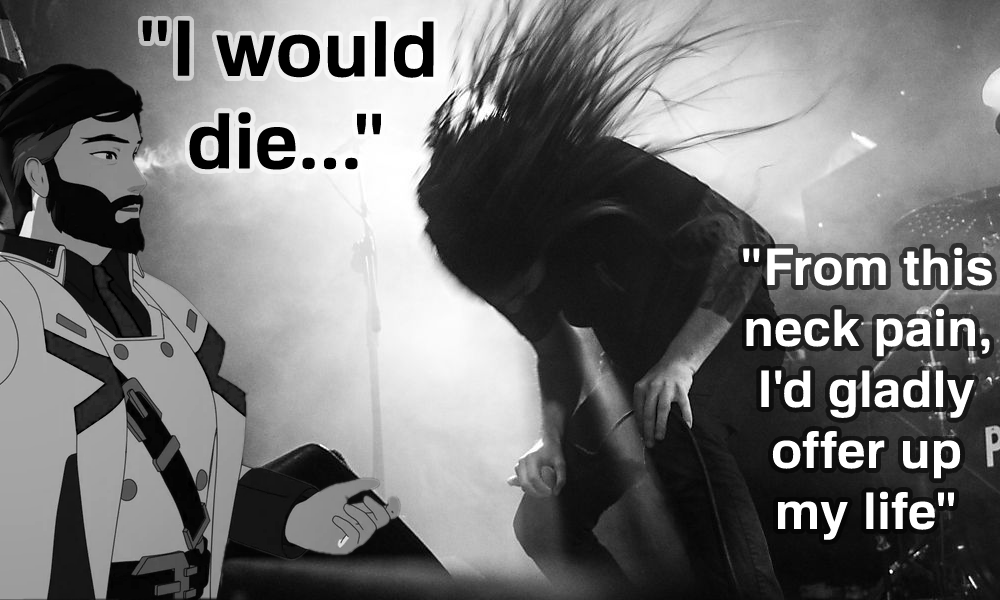 In the suburbs of Salt Lake City, Utah, a nasty house fire spread to three other neighboring homes after a terrible accident involving a prized hairspray collection. Luckily for the inhabitants, nobody got seriously hurt. Unluckily for Tyler, who lives three blocks away from the fire, it also means the emergency services couldn’t respond to his 911 call. Worse yet, the only people who responded were us.

“Yeah, I called the ambulance three hours ago,” shouted Tyler, rhythmically moving his impressively long hair up and down while ‘Hero’, the song from RWBY’s Volume 7 soundtrack was playing loudly from his speaker setup connected to his phone. “I think they forgot about me due to the fire. Now I can’t really do anything, only to keep headbanging to this sick song.”

The popular song, composed by Jeff Williams and sung by Caleb Hyles, continued playing during our difficult-to-hear conversation. “My friend sent me this, I figured I’d do a quick ‘sesh’ – just headbang during the chorus and get back to listening to Cannibal Corpse. I’ve been listening to this song for… I don’t know how long but I’ve counted past 100 listens. And I just can’t stop, my body stopped responding a while ago.”

After the song ended, inevitably repeated and the calm intro that lasts exactly for one minute began once the song, Tyler continued: “At first I just thought I’d get tired after a bit, and believe me, I am.” The proof of that is obvious. Tyler’s black Slayer logo t-shirt has been almost completely ripped apart at the neckline, while a small pool of sweat has formed under his wobbly legs. “I thought I’d stop once my phone died, but it’s been on ‘Super Battery Saver’ mode for like two twenty listens and it doesn’t look like it’s gonna stop any time soon. At this point I think the head is banging me.”

After our journalist at the scene, wearing a branded facemask and keeping a safe distance from the headbanger, offered to turn the song off, Tyler threw his hands off to the sides dismissively. “That’s alright, I think I’ve gotten used to it by now. I stopped feeling anything in my upper half about forty listens ago and during the intro I don’t really headbang… I think my head just bobs in anticipation at this point.”

As the song’s final chorus began playing, a loud crack was heard across the room coming from Tyler’s neck, but he was barely concerned. “Ow, I felt that one. It’s okay, now it only happens once or twice every five listens. I think tomorrow I’m gonna have the worst case of bangover I’ve ever had.”

We hope you survive until tomorrow, Tyler. At least longer than your phone that is.