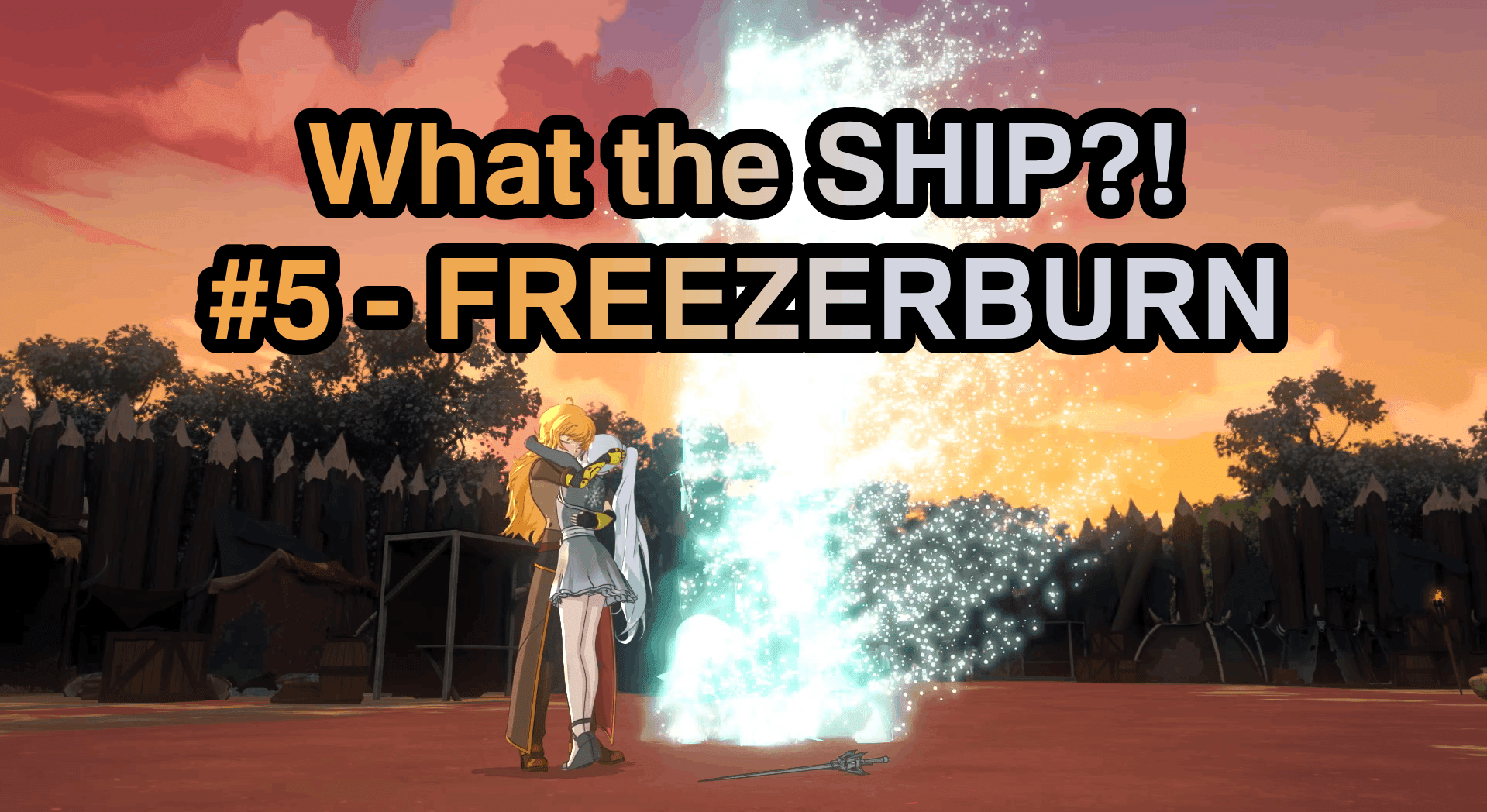 Welcome to What the Ship?! – the series that introduces, analyses and evaluates the pairings between RWBY characters, known as ships. It’s Yang’s birthday today, so we’ll be taking a look at arguably the second best Yang ship there is – Freezerburn!

It’s a ship between the huntresses and team RWBY members Weiss Schnee and Yang Xiao Long. Their names, powers and even personalities are quite the opposite of each other, with Weiss representing cold, frost and snow both in her name and her most-commonly used Dust type (though people forget she does use different Dust too!) while Yang represents fire, the Sun and flames with her name, fiery Semblance and hot temper (though people also forget she isn’t just a gung ho pun machine). Having someone so strongly representing ice and someone so strongly representing fire leads us to the name – freeze and burn, or Freezerburn.

General summary of the portrayal

Weiss and Yang, although both are titular members of team RWBY, only meet in the third episode of the show, The Shining Beacon, Pt.2., though, strangely enough, Yang is holding another girl in her arms when she first sees Weiss.

Ruby is explaining to her sister how she blew a crater in the school yard after meeting Weiss. During that explanation, Weiss butts in and scares Ruby, making her jump into Yang’s arms. Although the entire scene is more-or-less the birth of a different ship, White Rose, Yang does give a ‘look’ to Weiss and tries to have her little sister make a friend out of the heiress. Later on in the episode, Yang and Ruby introduce themselves to Blake, a scene that’s the beginning of a different ship – Bumbleby (Blake and Yang). And only after that do Weiss and Yang share a line together, shouting “Oh no, not you again!” at the same. For a first meeting – it’s a rough start. Not only do they end the episode arguing with each other, two other, more popular, Weiss and Yang ships get their iconic starts here (White Rose do meet up in V1E2, but their interactions are mainly antagonistic there).

The next few episodes are a bit sparse on the Freezerburn front, mainly setting up White Rose and Bumbleby pairings during the Huntsmen Initiation, but Yang does attempt to help Jaune get closer to Weiss, telling him that calling Weiss “Snow Angel” wasn’t a great start. For what it’s worth, Yang caps off RWBY’s fantastic Nevermore kill by saying “Well that was a thing” to Weiss, not Blake.

Apart from supporting Weiss in her classroom duel against a Boarbatusk, Yang actually has a few more interactions with Weiss over the course of Volume 1. In V1E15 “Stray”, Yang questions Weiss’s motives to visit the docks, receiving a “Quiet, you!” for her efforts. Later in the episode and in V1E16 “Black and White”, Yang disciplines Weiss for not caring enough to search for missing Blake. It’s by far the most lines they share in Volume 1, which is absolutely overshadowed by yet another team RWBY ship – Weiss and Blake’s Monochrome, so much so that the volume finale is named after them! Freezerburn just gets the worst luck, it seems.

In V2E2 “Welcome to Beacon”, Yang teaches Weiss how to play the admittedly really cool-sounding board game, getting real close and physical with her.

V2E4 “Painting the Town…”, which might as well be titled “Freezerburn” instead, features team RWBY’s fight against Roman in an Atlesian Paladin. Ruby calls out team attacks, which were named after ship names at the time. Freezerburn was the first one to get a shout out and has Weiss freeze the ground, with Yang doing an exploding punch to spread mist all over the battlefield. After the fight Weiss makes a terrible pun, but Yang completely sandbags it, in a hilarious reversal of roles. Fun fact: at that time, Yang and Weiss have both made a pun exactly the same number of times: 1. FNDM’s obsession of ‘punny Yang’ is likely the result of mixing it with Yang’s voice actress Barbara, who actually loves puns, but it comes up in discussions more often than you’d think. Oh, and V2E5 “Extracurricular” has Weiss and Yang planning out the school dance, which is basically where Volume 2 leaves Freezerburn off, apart from a conversation in Mountain Glenn.

Volume 3 has Weiss and Yang advancing to the doubles round together, fighting against Flint and Neon of Atlas’ team FNKI. Weiss even sacrifices herself so that Yang could finish off the fight. After the round’s done, Yang even holds the burn-up Snow Angel in her arms! After Yang’s ‘Break a leg!’ incident, Weiss not only supports and unquestionably takes Yang’s side, she even defends her from Blake’s suspicions.

The rest of the volume’s light on their interactions, with Volume 4 being completely absent of them, understandably as the whole team is spread out. Yang does reunite with Weiss in V5E4 “Lighting the Fire”, after Yang’s mom Raven kidnaps Weiss. That’s gonna make family dinner awkward with those two. The episode ends with them in a touching embrace, as Weiss’ summoned knight slowly disappears, showing how Weiss no longer needs anyone to protect her with Yang around. A definitive Freezerburn scene. And it actually keeps getting better.

Volume 5 by far can be considered the definitive Freezerburn volume. After Yang and Weiss ride off into Raven’s portal, they share a heartfelt hug together with Ruby. V5E7 “Rest and Resolutions” have RWYORNJ some well-needed banter, with Yang and Weiss being no exception – with the Sun Dragon teasing the Ice Queen quite a bit. Finally, like any good RWBY ship, Freezerburn gets its highly emotional and personal scene in V5E8 “Alone Together”, which even feels like it was named after Yang and Weiss. They finally open up together and share a long intimate moment together. As important as the scene is for the ship, one must realize that a lot of the discussion is about Yang’s and Weiss’s relationship with Blake. Also, Weiss herself admits that she and Yang aren’t as close as Yang is with Blake, firmly cementing it as Yang’s #2 ship behind Bumbleby, if not in the eyes of the characters, then at least in the eyes of the writers. Another point going against today’s ship in this episode is that by its end, Ilia Amitola confesses her feelings to Blake. Although Reading Rainbow isn’t nearly as popular as Freezerburn (Ilia herself isn’t exactly popular within the FNDM but that’s a different discussion entirely), it’s almost funny how almost every time Freezerburn would have to shine, some other ship gets the spotlight during that same episode.

Volume 6, however, wasn’t kind to Freezerburn at all. Considered by many (and for good reason) the volume of Bumbleby, it had a total of five lines exchanged by Weiss and Yang, which is absurd for two of the most prominent characters in the show. Volume 7 continues the bee train while also pushing White Rose, leaving Freezerburn basically off the screen with just seven lines between the two. And if you’re hoping for something better in Volume 8… The whole team is split into two, with Weiss choosing to stick with Ruby, meaning for more than half of the Volume the two don’t meet or interact whatsoever. They do have a nice hug in V8E10 “Ultimatum”, but it’s brief, wordless, lasts for 2.5 seconds and is immediately overshadowed by the Bumbleby headbutt. Poor Freezerburn.

That covers Freezerburn in the main show. Ice Queendom has a fascinatingly different interpretation of Weiss and Yang’s relationship, however as the show has not concluded, I reserve my opinion on it later.

Number of “looks” given to one another: 36 looks.

Out of the 5 possible 2-person ships of team RWBY (we don’t count Enabler, ya sickos), Freezerburn quite clearly shares the #3 spot with Monochrome and Ladybug (Ruby and Blake), both in the show and in the FNDM. While these ships are huge compared to most others from the show, they aren’t anywhere close to the titans like Bumbleby or White Rose. And while that’s a result of many individual factors, one of the core reasons for it is undeniably the complete lack of screentime Yang and Weiss had post-Volume 5. Google Analytics backs this data up too – searches for Freezerburn shot significantly up right before and after Volume 5’s scenes and never reached that peak since. This poses the idea that if RoosterTeeth switched tracks and had more time of Yang and Weiss together, their ship could become much more popular. Unfortunately, it’s incredibly unlikely, as Bumbleby (and White Rose in a way) seem to be becoming more and more canon each Volume.

Therein lies Freezerburn’s tragedy – it’s an actually incredible ship that so many seem to pass off due to other ships sailing past it. Yang and Weiss have incredibly different upbringings and outlooks on life, but they do learn a lot from each other, while also showing how deeply they care for one another – far more than just teammates.

At the time of writing, Freezerburn has a strong 911 works, inching past Monochrome (866) and Ladybug (782) but trailing quite far behind an actual canon powerhouse Renora (Ren and Nora). It’s clear from the fanfics and fanart that Freezerburn has quite a number of dedicated fans, clearly staying as a long-term staple of RWBY shipping FNDM.

Unsurprisingly, not much. While there may be some Freezerburn shippers among the vast production crew that contains CRWBY, of the most recognizable names like the writers or the voice actors, none have presented any real support for it. In fact, back in the day, Weiss’s voice actress Kara stated she likes White Knight (Weiss and Jaune), while Barbara is openly a fan of Bumbleby. Once again, two of the more popular ships bully Freezerburn out.

Yang and Weiss are a fantastic duo, that proved their great dynamic in Volume 5. Unfortunately, time and time again, other ships seem to overtake it at its most important moments, but the powerful fan support still has the ship sailing even without CRWBY’s recognition or screentime in the show.

Find the previous What the Ship?! articles here!

Man Inexplicably Thinks the BY in Bumbleby Stands for Bysexual

Another entertaining entry. Keep up the good work!

If you take requests for the next installment may I humbly offer one of the following:

This article makes a pretty solid case for Yang & Weiss’ dynamic as character foils who develop a bond that *could’ve* gone romantic but works just as well on the ride-or-die teammate & friend front. Then again it’s not like the writers would have to break an arm to sell me on Bees’ Schnees either.

Thanks for reading the article! I admit I didn’t really feel the ship before I began research for it, but after finishing I can definitely see the two being together. Not necessarily as lovers, but true friends and inseparable teammates, like you described.