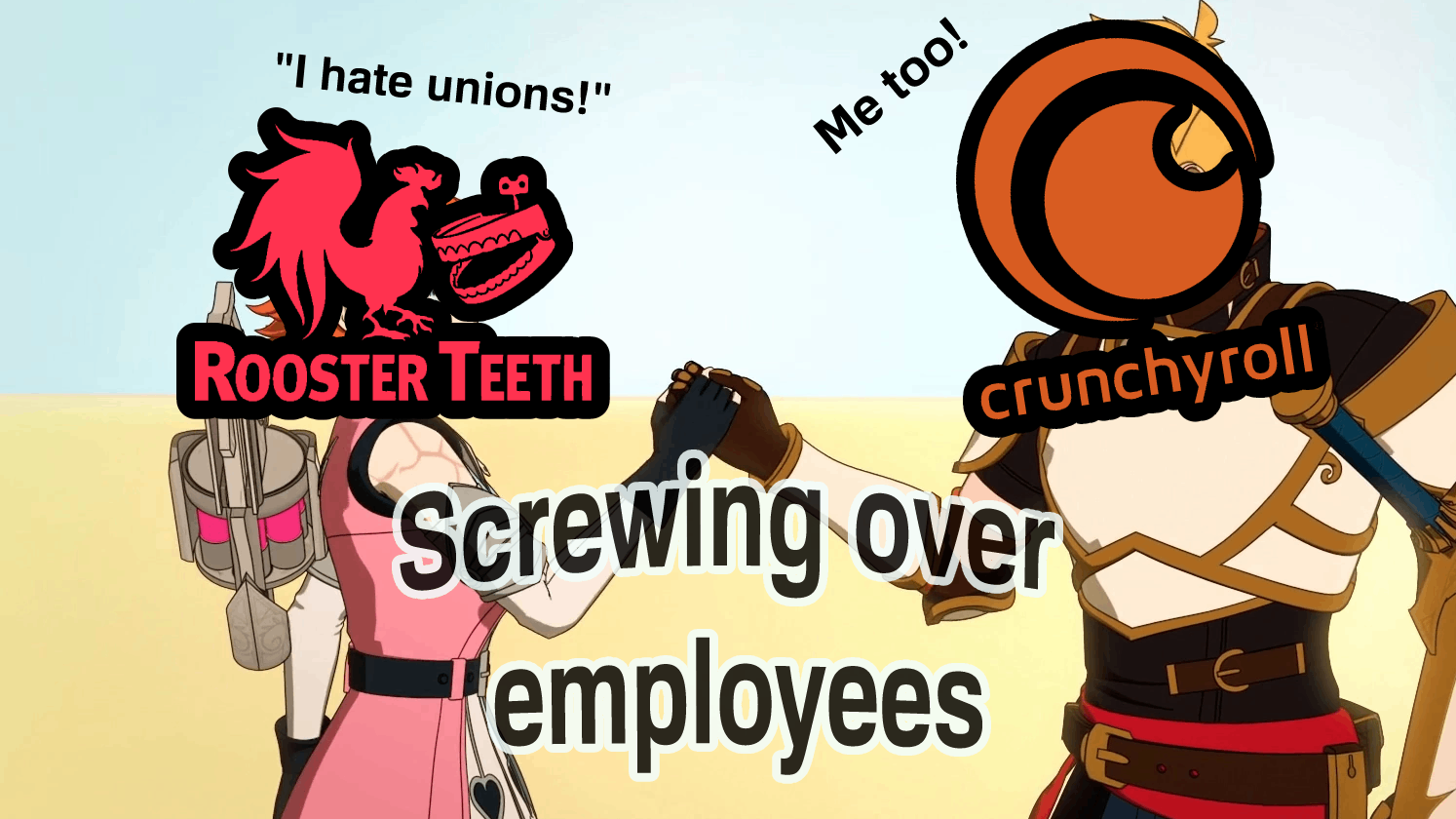 On January 24th, Rooster Teeth, company known most for releasing hit web series like Red vs Blue and RWBY, as well as abusing the people creating said series, has dropped a bombshell of an announcement – the newest volume of their most popular series, the aforementioned RWBY, will release on the anime streaming platform Crunchyroll exclusively.

This announcement, which upset a large part of the paying audience, was completely accidentally released at the same time as a brand new and exciting trailer, one that is also the first piece of animated Volume 9 content in months. Luckily for Rooster Teeth, any negative comments and possible backlash were drowned out by excitement over a funny purple cat.

This unexpected partnership between the companies is bewildering mostly because Rooster Teeth already has a subscription service of their own, RT FIRST, which they constantly mismanage in every way possible, almost as bad as they mismanage their own employees. The cracks started to show when the newest season of another, “popular at the time”, animated series with a weirdly written title, gen:LOCK, was sent over as an exclusive to HBO Max. Surprisingly, nobody cared too much because the second season was absolutely awful and only six people total have seen it. Later, Rooster Teeth failed to produce any new RWBY content for over a year, which led to them bleeding massive amounts of FIRST subscribers, who were there to watch RWBY and nothing else. After that, the public found out how bad RT treated their employees, which led to even more FIRST cancellations. And now, as the final nail in the subscription service coffin, they’re giving away their most popular show to the biggest anime streaming service in the world. The biggest question is – why?

The most obvious answer would be: Warner Media. After all, both Rooster Teeth and Crunchyroll serve big daddy Warner, right? That was true up until October 2021, after which Crunchyroll was bought by Sony and merged into Funimation. So what would be the real reason for these exclusivity rights? Is it to engage existing fans and offer them a higher quality service? Maybe it’s to attract a brand new audience of anime-watchers to RWBY? Just to earn money from expensive exclusivity rights? Of course not! It’s all to better abuse the employees of both companies.

In a public post on his private wall on RoosterTeeth.com, one of Rooster Teeth’s upper management has announced that the primary reason for housing RWBY Volume 9 on Crunchyroll was to better learn from their experience in making their employees lives miserable:

“As you all know, Rooster Teeth stands proud as one of the worst animation places to work at in the United States, perhaps even the world. Only one other company has had a reputation for being so great at their job of underpaying and undervaluing their hard-working employees – and that’s our friends at Crunchyroll. From paying voice-actors on millions-grossing-movies a pathetic pittance, to having some absolutely wild Glassdoor employee reviews mentioning insane crunch and terrible upper-management, we have found that we have a lot in common! Not only that, but just like us, they absolutely hate unions! Now, we despise unions with a passion and as a result, we made a union leader an antagonist in our newest RWBY game. But these guys are something else! They hate unions so much, that when a main character of a hit show asked them just to talk about unions so that he’d reprise his role, they immediately recast him! It’s clear that Rooster Teeth has a lot to learn from Crunchyroll in terms of worker abuse, and because of that we are eager to work with them together to mistreat our employees in new and exciting fashion.

whoever the people are who run this site:
Good job, keep doing it.

I’m glad I jumped off of the rt ship before the the Kdin situation, it’s a life of bliss now, but this article made me laugh like you wouldn’t believe 😆😆