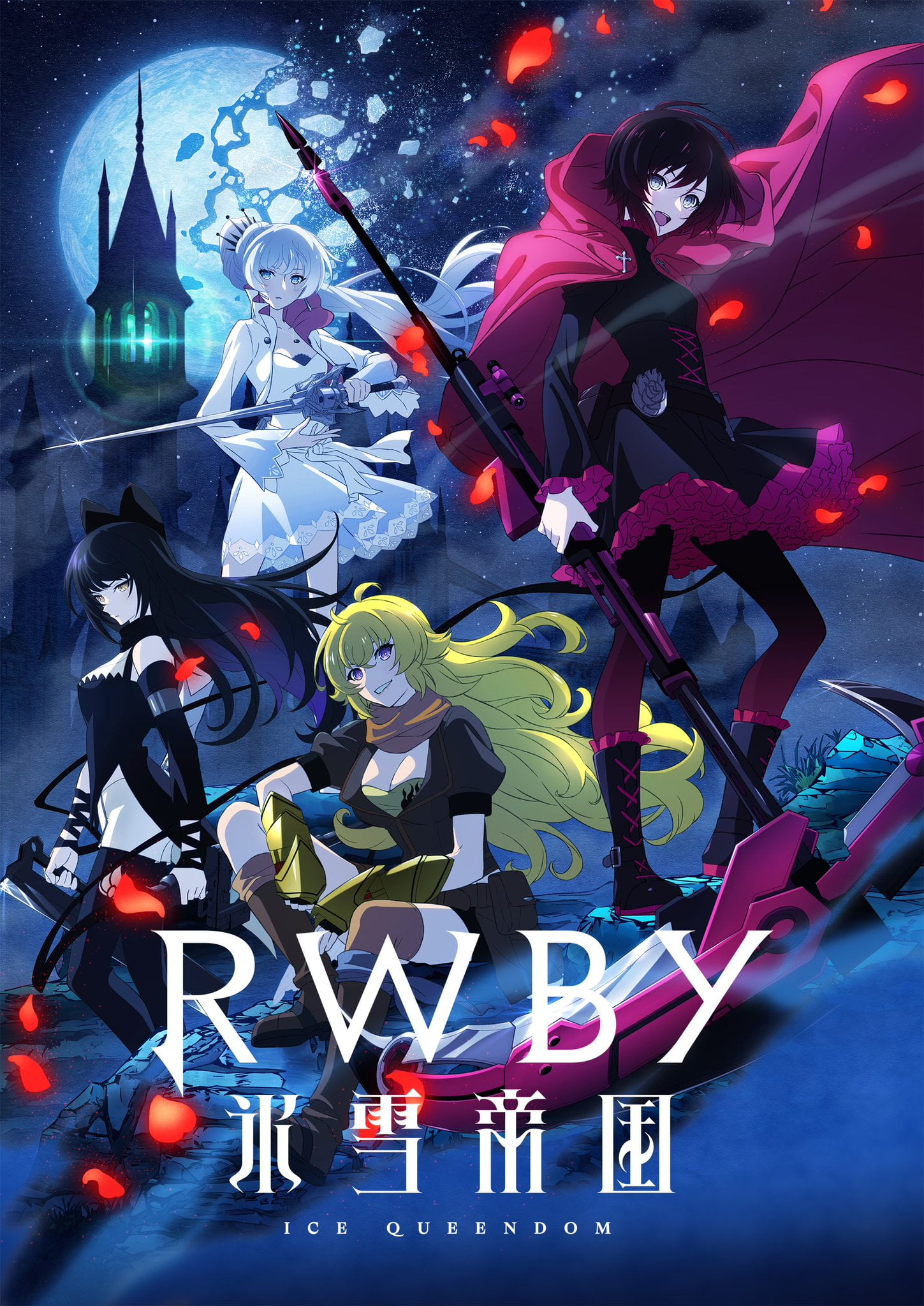 Aside from the information that we’ve known previously, other news include new character designs for the anime, opening and ending songs in the show, an upcoming comic tie-in and new figurines based on the anime.

The website features new outfits for teams RWBY and JNPR. The character page also includes Ozpin, but he does not have an anime-exclusive outfit detailed. The following image composing all character outfits was posted by /u/Jonathan911217:

The opening and ending songs of the anime were revealed. The opening theme, “Beyond Selves” will be composed by Ryo Takahasi, better known as void_chords, who worked as a composer on numerous series. The ending theme “Awake” will be sung by Saori Hayami, who is also the voice actress for Ruby in the show.

A RWBY: Ice Queendom comic will be serialized on monthly Dengeki Daioh, a Japanese shounen manga magazine. The comic will be drawn by SuekaneKumiko.

Additionally, Good Smile Company has unveiled figurines based on the new outfits for team RWBY in the anime, as well as a tie-in Nendroid figure exclusively for Ruby.

Several sources cite a Summer 2022 release alongside a simultaneous English dub, but we could not confirm this information as of the time of writing, as the link to this announcement by Crunchyroll has been deleted and all mention of RWBY: Ice Queendom has been removed. It has been now revealed that the article was unpublished due to an error in the embargo date. The current article does not state a specific date, but promises a 2022 release and a simultaneous broadcast of both Japanese and English voice-overs. The page also mentions that streaming will be done both on Crunchyroll and Rooster Teeth, which leads us to believe that the show will also air on Roosterteeth.com, possibly as a FIRST member exclusive.

On March 26th, the AnimeJapan panel for RWBY: Ice Queendom was held, which you can watch with an English translation here.

In the panel, a new trailer was shown, featuring scenes from Volume 1 in a brand-new 2D anime art style. Out of the shown cast of characters in the website, only team RWBY and Ozpin appear in the trailer. The trailer quite closely follows the events of Volume 1, but with an added post-credits scene, which shows Weiss standing in front of herself, surprised.

The complete absence of Team JNPR, CRDL and other supporting characters, as well as the very first promotional art that featured a Malevolent-looking Weiss with a broken family sigil has led some fans to believe that the show will follow Volume 1 of the show only up to a point, which will then diverge from the main storyline into something completely new. The fact that Jaune wasn’t seen in the trailer and Penny does not even appear in the website has fans speculating that the point of divergence would be right after V01E10 “The Badge and the Burden”, where a majority of the trailer’s scenes are taken from, and which is followed by the “Jaunedice” episodes. Gen Urobuchi, the animation planner for the upcoming show, has stated: “The story composition for this show is easy to understand for newcomers to the “RWBY” series.” It seems to support the idea that the show will follow the first half of Volume 1 to introduce the characters and setting, while diverging from canon storyline later.

Updated: On March 28th, Geoff Yetter, Head of Licensing and Consumer Products at Rooster Teeth, shared some new information on the Rooster Teeth forums, alongside a heartwarming tribute to Monty Oum, who apparently was the one who started the conversation for the RWBY: Ice Queendom project 8 years ago. The post reveals that RWBY: Ice Queendom will not be an alternate universe or a reboot, but will recap the events of Volume 1 and 2 in the first two episodes, after which the show will diverge into a “canon-adjacent” story.

The post also confirmed that the show will release in the summer, with subtitled and dubbed versions available on the same day as the Japanese release on both Crunchyroll and Rooster Teeth FIRST. New episodes will be released weekly and follow traditional anime runtimes.

Geoff also replied to all of the questions posed by the FNDM, apologizing whenever he couldn’t answer due to spoilers or legal reasons. From the answers that he did provide, we can see that the show will be set after Volume 2 but before Volume 3 and some of the characters will be recast with new voice actors. The show will likely not be releasing for free on Rooster Teeth – only on FIRST and will not feature music by Jeff and Casey Williams, who are behind the majority of RWBY’s soundtrack. Finally it seems that the new additions in the show such as the characters, locations and the Grimm could be added to the show’s canon, comparable to how similar additions from the Amity Arena video-game and the RWBY book series joined the canon.